Rare books Natural History More Rare Books from Alembic Rare Books Farthest North. Being the record of a voyage of exploration of the ship Fram 1893-96 and of a fifteen months'… 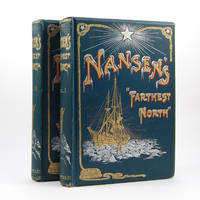 Farthest North. Being the record of a voyage of exploration of the ship Fram 1893-96 and of a fifteen months' sleigh journey by Dr. Nansen and Lieut. Johansen with an appendix by Otto Sverdrup Captain of the Fram. About one hundred and twenty full page and numerous text illustrations and coloured plate in facsimile from Nansen's own sketches. Portrait and maps.

Farthest North. Being the record of a voyage of exploration of the ship Fram 1893-96 and of a fifteen months' sleigh journey by Dr. Nansen and Lieut. Johansen with an appendix by Otto Sverdrup Captain of the Fram. About one hundred and twenty full page and numerous text illustrations and coloured plate in facsimile from Nansen's own sketches. Portrait and maps.

London: George Newnes, Ltd., 1898. 2 volumes, octavo. Publisher's green cloth elaborately blocked in gilt, silver, and red with depictions of the Fram on the covers, red speckled edges. Frontispiece to each volume, colour plate and colour folding map to volume I, 212 illustrations from photographs and drawings. Subtle repairs to the joints of volume I, professional tissue repairs to some minor closed tears at the inner margin and a couple of the folds of the map, cloth lightly rubbed at the extremities but overall fresh and bright. Very good condition. Second English language edition, the first to appear in the famous gilt-blocked publisher's cloth. A lovely set, the cloth bright and fresh. Born in Christiana (Oslo) in 1861, Fridtjof Nansen trained as a scientist. He earned a PhD in zoology, made important contributions to neurological anatomy, and worked as a natural history curator in Bergen and Oslo. He was also a champion cross-country skier, and combined his scientific interests with a thirst for adventure by becoming the first person to cross the unexplored interior of Greenland, using a novel method - skis. Next he planned an even more ambitious trip to the Arctic, again applying radical new ideas to the challenge. He began with the scientific hypothesis that an ocean current carried polar ice from east to west, and decided that the best way to reach the pole was to intentionally trap his ship in the pack ice near Siberia, live in it for a year or two as it made its way toward the pole, and then set off with skis and dogs for the final leg. Instead of trying to bend the Arctic to his will, he would "take note of the forces of nature and try to work with them and not against them" (Huntford, p. 180). Nansen's plans were technologically ingenious. The strength of polar ice could crumple a normal ship, so he devised a revolutionary new type, one with "sloping sides and rounded bilges, completely smooth, rather like an egg cut in half. In this way the ice could not get a grip, and instead of being crushed by the floes she would rise safely under pressure" (Huntford p. 183). He tinkered obsessively with his sledges and skis to adapt them for arctic conditions; designed lighter, more flexible clothing; and was the first polar explorer to adopt the Primus stove. He arranged a wide variety of fresh and preserved food to provide nutritional balance for the crew, and had many items laboratory tested before ordering them. Scurvy had stalked every previous polar voyage, and while Nansen's theory about its cause was incorrect, the varied diet meant that this was the first polar expedition in which no one was affected. In fact, it was the first such expedition in which every crewman made it back safely - many, including Nansen, having gained weight rather than lost it despite spending nearly three years in the arctic. The Voyage was also one of significant scientific discovery, with the Fram "serving as an oceanographic-meteorological-biological laboratory" that obtained enough data to fill six volumes of scientific observations published on the ship's return (Nobel Peace Prize biography). Though Nansen did not reach the north pole, he achieved what was then the farthest north (86°13.6 N), around 314 km beyond the previous record. He "returned to international acclaim not only for the voyage itself but for its results, proof of a deep Arctic Ocean, free of any land masses or islands, and extensive data on magnetism, zoology, and oceanography. His account of the journey, Farthest North, was a worldwide bestseller and prepared him for an effective life of diplomacy" (Books on Ice).

(GB)
Bookseller Inventory #
277
Title
Farthest North. Being the record of a voyage of exploration of the ship Fram 1893-96 and of a fifteen months' sleigh journey by Dr. Nansen and Lieut. Johansen with an appendix by Otto Sverdrup Captain of the Fram. About one hundred and twenty full page and numerous text illustrations and coloured plate in facsimile from Nansen's own sketches. Portrait and maps.
Author
Nansen, Fridtjof
Book condition
Used
Quantity available
1
Binding
Hardcover
Publisher
George Newnes, Ltd.
Place of Publication
London
Date published
1898
Keywords
Technology|Natural History|Biology|Oceanography|Arctic & Antarctic|Scientific Illustration|Popular Science|Exploration & Travel
Note
May be a multi-volume set and require additional postage.

Seller rating:
This seller has earned a 5 of 5 Stars rating from Biblio customers.
Biblio.com member since: 2018
Aberlour, Moray
Ask Seller a Question

gilt
The decorative application of gold or gold coloring to a portion of a book on the spine, edges of the text block, or an inlay in...[more]
Cloth
"Cloth-bound" generally refers to a hardcover book with cloth covering the outside of the book covers. The cloth is stretched...[more]
New
A new book is a book previously not circulated to a buyer. Although a new book is typically free of any faults or defects,...[more]
edges
The collective of the top, fore and bottom edges of the text block of the book, being that part of the edges of the pages of a...[more]
Publisher's cloth
A hardcover book comprised of cloth over hard pasteboard boards. ...[more]
plate
Full page illustration or photograph. Plates are printed separately from the text of the book, and bound in at production. I.e.,...[more]
octavo
Another of the terms referring to page or book size, octavo refers to a standard printer's sheet folded four times, producing...[more]