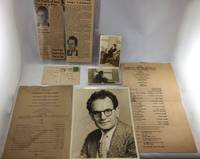 Good +. A small grouping of items relating to the life of Philip Loeb, an actor best known for his radio work on the hit program "The Goldbergs." The collection likely comes from another actor named John Most, as his name appears on several of these documents. Loeb was accused of being a communist in 1950 and was subsequently blacklisted. Loeb steadfastly denied communist sympathies, but the blow to his professional life was too much to bear, and Loeb commited suicide in a hotel room in New York in 1955. Included are two postcard-sized photographic prints of Loeb watching a rehearsal of a play he was directing on Broadway, "The Three Sisters," by Chekhov; an 8" x 15" program for that same play; an an 8" x 10" portrait of Loeb, inscribed by him to Johnny Most; a program for a play produced by Loeb entitled "Common to the Trade" (about 7.5" x 11"); some news clippings of Loeb's untimely death; and, perhaps most interestingly, a small postcard depicting First National Studios in Hollywood, with a small note from Loeb on the back, adressed to Most: "the colored ones are those I have organized. Love, Phil." Loeb had a long career as an officer in the Actor's Equity Association, now over a century old, and one of the most consistently radical unions in the entertinment world, having stood for integration in the 1940s, and steadfastly against McCarthyism in the 1950s (while the Screen Actor's Guild has a much more checkered history). Condition varies from good to very good, with general age-toning to some documents, some old tape or glue residue on the reverse of some pieces, but the collection is generally presentable.

All books are returnable within ten days if returned in the same condition as sent. All books in my inventory are authenticated and described to the industry's highest standard of professionalism. Payment should accompany order if you are a new customer. Current customers will be invoiced with payment due in 30 days. Institutions billed per their requirements. ALL ITEMS SUBJECT TO PRIOR SALE. Books sent via US Postal Service unless other arrangements are requested. INTERNATIONAL PURCHASES WILL BE SHIPPED AT THE EXACT COST. NOTE: USPS NO LONGER SHIPS SURFACE MAIL TO OVERSEAS. Where possible, we will ship GLOBAL PRIORITY, minimum charge of $23.95, maximum weight 4 pounds. For packages over 4 pounds, you will be contacted with exact charges. Ohio residents please add 5.75% sales tax. We accept VISA, MASTERCARD, DISCOVER, and AMERICAN EXPRESS.

Seller rating:
This seller has earned a 5 of 5 Stars rating from Biblio customers.
Biblio.com member since: 2017
Lakewood, Ohio
Ask Seller a Question

As a small, independent bookseller in Cleveland, Ohio, I deal in general used, rare, and antiquarian books, autographs, manuscripts, pamphlets, and personal and family papers in all subjects. My family has been in the antiquarian book business since 1971. Are you moving, downsizing, or doing some spring cleaning? Did you inherit or otherwise come into some old books? Or, maybe you've collected modern novels from the last thirty or fifty years. No matter what kinds of books you have, we'd love to take a look at them! We travel throughout Ohio, western Pennsylvania and New York, southern Michigan, and eastern Indiana, and will travel farther in some cases to look at whole libraries or even just a few particularly interesting books. Give us a call at (216) 352-3940 and we can talk more about the kinds of books you have.

inscribed
When a book is described as being inscribed, it indicates that a short note written by the author or a previous owner has...[more]
New
A new book is a book previously not circulated to a buyer. Although a new book is typically free of any faults or defects,...[more]