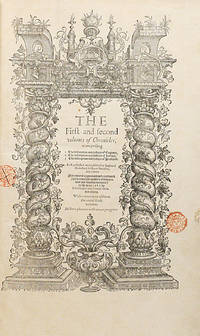 London: John Harrison, George Bishop, Rafe Newberie, Henrie Denham, and Thomas Woodcocke, 1587. Second Edition. 18th-century calf rebacked. Very Good. THE SECOND EDITION (1587) OF HOLINSHED'S "CHRONICLES": THE BOOK AND THE EDITION USED BY SHAKESPEARE AS A SOURCE FOR A DOZEN OF HIS PLAYS. "In 1548, the prominent London printer and bookseller Reyner (or Reginald) Wolfe ambitiously decided to produce a universal history and cosmography... of the world. After Wolfe's death in 1573, his assistant Raphael Holinshed took over the project, hired more writers and restrained its scope to the British Isles. The Chronicles was first published in 1577 in a two-volume folio edition, illustrated with numerous woodcuts. After Holinshed's death in 1580, Abraham Fleming published the significantly expanded revised second edition of 1587 in a larger folio format, this time without illustrations" (British Library). By scholarly consensus, it is the second (1587) edition, offered here, that Shakespeare used as the source of many of plays: "Shakespeare used Holinshed as a source for more than a third of his plays, including Macbeth, King Lear, and the English history plays such as Richard III. He used it in a range of ways, sometimes following the text of the Chronicles closely, even echoing its words and phrases; sometimes using it as an inspiration for plot details; and at other times deviating from its account altogether, either preferring other sources or his own imagination. Comparing Shakespeare's plays to Holinshed and other sources can provide rich insight into his creative intentions and processes, as well as giving us an idea of some of the context in which Shakespeare's contemporary audiences would have understood his plays" (British Library). The major use that Shakespeare made of Holinshed was certainly in the British history plays: "[Queen] Elizabeth herself said that [Shakespeare's history plays] existed 'aswell for the recreacion of our loving subjects, as for our solace and pleasure.' Both sovereign and subject certainly found much comfort and recreation in Shakespeare's histories because they stage a thematic movement that shapes Holinshed's Chronicles 1377-1485; from the death of a frequently chaotic, violently chivalric, medieval world to the birth of the 'Peaceable and Prosperous' early modern commonwealth of their day... "An astute reader, Shakespeare transformed into the medium of drama four major political themes and messages taught by Holinshed and his successors who enlarged the 1587 text: the ideal and decorum of English kingship, the role of France in English public discourse, the idea of Englishness, and the idea of the commonwealth..." (Igor Dhjordjevic, "Shakespeare and Medieval History", Oxford Handbook). On the bibliography of the 1587 edition: In February 1587 the Archbishop of Canterbury was ordered by the Privy Council to recall and censor ("reform") the book on the grounds that the new material in the second edition included "sundry things which we wish had bene better considered; forasmuch as the same booke doth also conteyne reporte of matters of later yeeres [i.e., the reign of Elizabeth I] that concern the State, and that "ther is inserted such mention of matter touching the King of Scottes as may give him cause of offence." As a result, some 16 pages in volume II and almost 150 pages in volume III were excised ("castrated") and replaced by a much smaller number of pages (only seven leaves in volume III) to paper over the gaps. (The censors, however, neglected the index, which continued to contain references to the excised pages.) In the early eighteenth century, three separate publishers issued sets of replacement leaves that collectors could use to complete their castrated sets of the 1587 edition. (Cyndia Susan Clegg, "Censorship", in Oxford Handbook; Keith L. Maslen, "Three Eighteenth Century Reprints of the Castrated Sheets in Holinshed's Chronicles", The Library, 5th Series.) There is wide variation among the surviving sets of the second edition, partly because of the presence of three different eighteenth century sets of replacement leaves, and partly because the original sixteenth century castrations and replacements were apparently not applied consistently to all of the then-existing sets. Some sets now have one or more of the castrated pages; some have the sixteenth century replacement pages; some have the eighteenth century replacement pages; and some are mixed-and-matched. Thus, "no two copies of Holinshed's Chronicles... are likely to have identical text" (Randall McLeod, "Cronicling Holinshed's Chronicles: Textual Commentary", in "The Peaceable and Prosperous Regiment of Blessed Queene Elisabeth: A Facsimile from Holinshed's Chronicles" (2005). In the copy offered here, the replacement leaves in volume III appear to conform to the set issued in 1722/1723 by William Mears, Fletcher Gyles, and James Woodman ("The castrations of the last edition of Holinshed's Chronicle: both in the Scotch and English parts, containing forty four sheets; printed with the old types and ligatures, and compared literatim by the original"). However, volume II of the offered copy does not include a complete set of the 18th-centurty replacement leaves, and the replacement pages that are present do not conform to the Mears/Gyles/Woodman set. Thus, this volume most likely contains the publisher's original sixteenth-century replacement leaves. (Castrated pages 421-24 are here replaced by a single leaf with the recto numbered 421 and the verso numbered 424; 432-38 are replaced by a single page 433, and 443-50 are replaced by two leaves numbered 443/444 and 445/450.) Provenance: With stamps on titles and privilege leaves from "Bibliotheca Regia", an unidentified Royal library (including the de-accession stamps "Double Vendu"). London: John Harrison, George Bishop, Rafe Newberie, Henrie Denham, and Thomas Woodcocke, 1587. Folio (234x363mm), eighteenth-century calf, rebacked. Some wear to boards. Text extraordinarily clean with wide margins. A beautiful and important set.

facsimile
An exact copy of an original work. In books, it refers to a copy or reproduction, as accurate as possible, of an original...[more]
folio
A folio usually indicates a large book size of 15" in height or larger when used in the context of a book description....[more]
recto
The page on the right side of a book, with the term Verso used to describe the page on the left side.
leaves
Very generally, "leaves" refers to the pages of a book, as in the common phrase, "loose-leaf pages." A leaf is a single sheet...[more]
New
A new book is a book previously not circulated to a buyer. Although a new book is typically free of any faults or defects,...[more]
calf
Calf or calf hide is a common form of leather binding.  Calf binding is naturally a light brown but there are ways to treat...[more]
rebacked
having had the material covering the spine replaced. ...[more]
verso
The page bound on the left side of a book, opposite to the recto page.