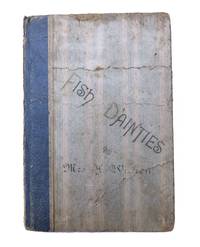 Melbourne: Mutual Provedoring Co. Ltd, 1892. First Edition. Born in Lambeth, cookery writer Harriet Frances Wicken (1847 - 1937) emigrated from England to Australia in 1886. Having studied at the National Training School for Cookery in South Kensington in London shortly after it opened and acquiring a diploma, Harriet Wicken published her first book, the 'Kingswood Cookery Book', in 1885. An expanded Australian edition of her English cookery book assisted in securing her the position of head 'instructress' of domestic economy at the Sydney Technical College and ensured continuity for her publishing career. According to the 'Australian Dictionary of Biography', in other small cookbooks that appeared during the 1890s, such as The Cook's Compass (Sydney, 1890) to promote the Sydney grocers J. G. Hanks & Co, and Fish Dainties (Melbourne, 1892) for the Melbourne Mutual Provedoring Co., or Recipes of Lenten Dishes (1896) as a seasonal gesture, Harriet Wicken stressed simplicity and her favourite 'dainty' recipes. Among the fish cakes, patties and soufflé, recipes in 'Fish Dainties' include baked barracouta, blue cod pie, boudins of whiting, kromskies of oysters and lobster, steamed moki with piquante sauce, schnapper in aspic, and a sharp maitre d'hotel sauce. Octavo, bound in decorated paper boards with regency-style stripe in blue and cream with blue spine, 56 pages, boards chpped and worn, a good copy only, internally sound.

G
Good describes the average used and worn book that has all pages or leaves present. Any defects must be noted. (as defined...[more]
spine
The outer portion of a book which covers the actual binding. The spine usually faces outward when a book is placed on a shelf....[more]
First Edition
In book collecting, the first edition is the earliest published form of a book. A book may have more than one first edition in...[more]
octavo
Another of the terms referring to page or book size, octavo refers to a standard printer's sheet folded four times, producing...[more]