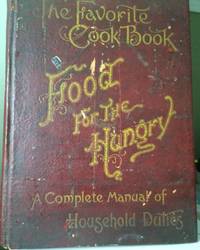 Food for the Hungry and Bills of Fare for All Seasons

Food for the Hungry and Bills of Fare for All Seasons: Two volumes in One

n/a: L M Palmer, 1896 FIRST AND ONLY EDITION THUS. GOOD. HATFIELD BOOKS AND MEMORABILIA, a FIVE STAR SELLER, presents the two-in-one book, FOOD FOR THE HUNGRY by JULIA MCNAIR WRIGHT together with BILLS OF FARE FOR ALL SEASONS by MARION HARLAND. VERY RARE. Only three things are certain: 1) This is a joining of 2 separate books, one my Ms Wright, and one by Ms Harland; 2) it was copyrighted in 1896; 3) this is the FIRST AND ONLY EDITION. Check out the table etiquette hints on p 215 such as "Don't use your fork as if it were a pitchfork." Marian Harland, aka Mary Virginia Terhune, was a spunky woman who recovered from tuberculosis, learned to type after breaking her wrist, and dictated her writing to a secretary after becoming blind in her in old age She authored over 25 books on such diverse subjects as "botany" and "the mission work of the Russians in Alaska." Marion Harland's novels were written over the course of more than sixty-five years, including the turbulent period before, during, and after the American Civil War 6 7/8" x 9 1/2", 532 pages (including index)(weight may require additional postage) with no dust jacket (probably as designed) Overall condition is GOOD. Pages (all edges are tinted red) = Fair Plus:heavy foxing throughout, brittle pages, title page and first fep separated from binding and laid in, owner name on first fep (a recipe from this 1900 resident of Long Island is laid in as well), else rest of binding solid, all print fully readable, corners rounded as designed, no additional marks. Cover (heavy red cloth boards, with particulars in fancy print gold gilt) = Good Plus: considerable rubbing with small patches of cloth rubbed off (particularly on back), front trying unsuccessfully to separate, else rest is solid to binder, corners remain sharp, no chipping or fraying, gilt remains clear, square. Noted book appraiser James Beattie has assigned this book a value of $130.00.

At Hatfield Books and Memorabilia, we take unusual care describing each book and its detailed condition. We do this so you, the customer, knows what you are getting for your hard earned money! If you are not satisfied with what you receive, wrap it back up and return it within 30 days of receipt, and we will promptly reimburse your PayPal account the full price paid plus the original shipping costs (if any).

Seller rating:
This seller has earned a 5 of 5 Stars rating from Biblio customers.
Biblio.com member since 2015
Cincinnati, Ohio
Ask Seller a Question

About Hatfield Books and Memorabilia

One word encapsulates 5 STAR Biblio member Hatfield Books and Memorabilia...CARE. We care enough about each book and our customer to carefully research and examine it, so we can fulfill your expectations. At Hatfield books, you will never see "may have some damage..." or "may have some markings..." Instead you will see details. Call us with questions during regular business hours (513-805-6725), or leave us a message. We'll get back to you (in the US)the next business day. Or e-mail us at "hatfieldbook@gmail.com".

Gilt
The decorative application of gold or gold coloring to a portion of a book on the spine, edges of the text block, or an inlay in...
Jacket
Sometimes used as another term for dust jacket, a protective and often decorative wrapper, usually made of paper which wraps...
Title Page
A page at the front of a book which may contain the title of the book, any subtitles, the authors, contributors, editors, the...
Fair
is a worn book that has complete text pages (including those with maps or plates) but may lack endpapers, half-title, etc....
Chipping
A defect in which small pieces are missing from the edges; fraying or small pieces of paper missing the edge of a paperback, or...
Rubbing
Abrasion or wear to the surface. Usually used in reference to a book's boards or dust-jacket.
Edges
The collective of the top, fore and bottom edges of the text block of the book, being that part of the edges of the pages of a...
Cloth
"Cloth-bound" generally refers to a hardcover book with cloth covering the outside of the book covers. The cloth is stretched...