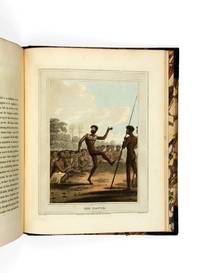 by CLARK, John Heaviside, and others

London: Edward Orme, 1814. Joints and extremities rubbed but the orginal binding quite sound and attractive.. Quarto, 160 pages letterpress without pagination, 100 handcoloured aquatints with the 1813 New South Wales supplement bound at rear (this comprising separate title-page, dedication leaf, 10 handcoloured aquatints and 14 letterpress pages); a fine copy of the early issue with watermarks dated 1811 in a handsome contemporary binding of half green russia, spine in compartments with gilt lettering and ornament.

One of the outstanding aquatint books of the early nineteenth century, including the remarkable supplementary suite of ten plates depicting Aboriginal life and customs. This is an early bissue (with watermarks dated 1811) of the first edition of Foreign Field Sports, a collection of 100 hunting scenes from cultures across the globe, including Africa, Europe, the Middle East and the Americas. This complete edition includes the 'Field Sports, &c. &c. Of the Native Inhabitants of New South Wales' separately published by Edward Orme the previous year. It comprises ten plates of Aboriginal hunting and ceremonial scenes with descriptive letterpress, separate title-page and a dedication leaf to Governor Bligh.

The ten scenes are remarkable in the history of early colonial Australian art, offering good-natured and unprejudiced depictions of Aboriginal life in an era when pejorative representation was the norm. The scenes include smoking out possums, a kangaroo hunt, spearing birds on the wing, fishing from canoes, a native dance, painted warriors, men in single combat and an idyllic night scene. Delicately hand-coloured and expertly printed, the ten plates 'are without question the most attractive and sympathetic of the early European depictions of the native inhabitants' (Australian Rare Books p.280).

Although the dedication leaf and plates are signed by John Heaviside Clarke, there is little doubt that he was not the artist responsible for the Aboriginal plates and their accompanying text. Clarke was a commercial artist working in London, turning original sketches into finished drawings ready for the engraving process. For decades controversy has surrounded the true identity of the artist of the Aboriginal studies. In Australian Rare Books, Wantrup argues convincingly for the natural history illustrator John Lewin, and explains the stylistic differences between Lewin's known work and the plates in this volume to the conventions and discretionary modifications made by Clark and his engraver. Wantrup maintains the artist must have experienced prolonged contact with the Aboriginal peoples of the Sydney region to produce studies of such detail, and through a process of elimination leaves Lewin as the only reasonable candidate. Nonetheless, Richard Neville, in his recently published monograph on Lewin, disagrees with this attribution on the basis of stylistic and aesthetic considerations. While the identity of the artist remains contentious, these depictions of Aboriginal life stand apart from contemporary work and remarkable for their sensitivity: 'other artists working in the colony at the time portrayed the Aborigines with grotesque sarcasm... But the drawings in Field Sports demonstrate respect for their dignity and exuberantly innocent humanity' (Australian Rare Books, p.281).

Aside from its relevance to Australian colonial history, Foreign Field Sports is a testament to the quality of English colour plate book publishing during the early decades of the nineteenth-century, an era that saw other magnificent books such as Ackermann's Microcosm of London. Competition between publishers produced unprecedented technical and artistic excellence, especially in the perfection of professional handcolouring techniques (of which Foreign Field Sports is a paradigm example). These volumes were expensive in their own time, often priced at several guineas a volume, and took pride of place in private book collections.

14 day return guarantee, with full refund including original shipping costs for up to 14 days after delivery if an item arrives misdescribed or damaged. For full terms please visit our website.

Hordern House, founded by Anne McCormick and Derek McDonnell in 1985 and named for our original building in Sydney's Potts Point, is an internationally renowned dealership, specialising in rare books, manuscripts and paintings.Nowadays we conduct our business in the heart of Surry Hills, five minutes from the centre of Sydney. We occupy an entire floor of a converted warehouse where we have created a customised environment for our work and the display of rare books, manuscripts & paintings.Always reflected in our extensive stock of rare and select material is our specialization in voyages and travels (with a special interest in the Pacific & Australia), natural history and colour-plate material, paintings and voyage art, historical maps and manuscripts.

quarto
The term quarto is used to describe a page or book size. A printed sheet is made with four pages of text on each side, and the... [More]
plate
Full page illustration or photograph. Plates are printed separately from the text of the book, and bound in at production. I.e.,... [More]
New
A new book is a book previously not circulated to a buyer. Although a new book is typically free of any faults or defects, "new"... [More]
First Edition
In book collecting, the first edition is the earliest published form of a book. A book may have more than one first edition in... [More]
fine
A book in fine condition exhibits no flaws. A fine condition book closely approaches As New condition, but may lack the... [More]
gilt
The decorative application of gold or gold coloring to a portion of a book on the spine, edges of the text block, or an inlay in... [More]
leaves
Very generally, "leaves" refers to the pages of a book, as in the common phrase, "loose-leaf pages." A leaf is a single sheet... [More]
spine
The outer portion of a book which covers the actual binding. The spine usually faces outward when a book is placed on a shelf.... [More]