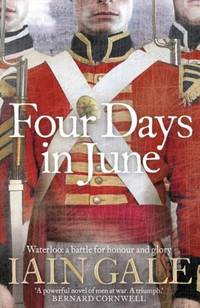 HarperCollins Publishers Limited. Used - Good. Ships from the UK. Shows some signs of wear, and may have some markings on the inside.

A remarkable debut novel, 'Four Days in June' is an imaginative but accurate reconstruction of five men – all real figures – five points of view, and four days of one of the world's most famous battles.Four days in June, 1815. Five men, three armies, on the fields of Waterloo. A battle for honour, glory, civilisation. And two great leaders, Napoleon and Wellington, in direct confrontation for the first time, to take their nations to victory. General De Lancey, Wellington's new Quartermaster-General, recently married and yearning for his beautiful wife. Colonel MacDonnell, a Scot who must hold his post to the last man. General Ziethen of the Prussian army, distrustful of the British but vital to their cause. Marshall Ney, mistrusted by Napoleon but revered by the French soldiers. And Napoleon, who must prove his worth as a great warrior for the glory of France. As the battle develops over the four days, it is seen through the very different positions and characters of the front men. From the eve of the battle to its bloody conclusion, there is defiance, desperation and great courage on both sides. Iain Gale, in his first novel, draws the scene, the devastation, the stench of war, with such vitality that, though the outcome is known, the tension of war comes vividly to life.

30 day return guarantee, with full refund including shipping cost for up to 30 days after delivery if an item arrives misdescribed or damaged. Please keep in mind that because we deal mostly in used books, any extra components, such as CDs or access codes, are usually not included. CDs: If the book does include a CD, it will be noted in the book's description ("With CD!"). Otherwise, there is no CD included, even if the term is used in the book's title. Access Codes: Unless the book is described as "New," please assume that the book does *not* have an access code.

Seller rating:
This seller has earned a 5 of 5 Stars rating from Biblio customers.
Biblio.com member since: 2009
Dunfermline, Fife
Ask Seller a Question

Better World Books generates funding for literacy charities through the sales of second-hand books. Our current partner charities in the UK are READ International, the National Literacy Trust, Room to Read. (Registered Charities no. 1128534, no. 1116260 and no. 1125803 and the National Adult Literacy Agency. Much of our stock is ex-library due to our close relationships with UK libraries. We offer a service that helps them keep their unwanted books out of landfill. All ex-library books will be marked as such in their individual listings. 99% of orders are dispatched within 24 hours and we offer a 100% money back guarantee if you are not completely satisfied.