Home Paul Haynes Rare Books A free discussion of the doctrines of Materialism, and Philosophical Necessity, in a Correspondence between Dr.… 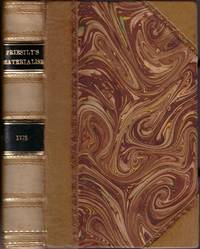 A free discussion of the doctrines of Materialism, and Philosophical Necessity, in a Correspondence between Dr. Price and Dr. Priestley. To which are added, by Dr. Priestley, an introduction, explaining the Nature of the Controversy...

A free discussion of the doctrines of Materialism, and Philosophical Necessity, in a Correspondence between Dr. Price and Dr. Priestley. To which are added, by Dr. Priestley, an introduction, explaining the Nature of the Controversy...

Joseph Priestley (1733-1804) British Enlightenment polymath. Scientist, theologian, philosopher he was the first to identify oxygen and other core gases. He invented soda water. In 1794 he emigrated to Pennsylvania where was befriended by Thomas Jefferson as 'one of the few lives precious to mankind'. His achievements have only recently begun to be acknowledged. His metaphysical works influenced Jeremy Bentham, John Stuart Mill, and Herbert Spencer. Priestley saw matter as the manifestation of spiritual force.

Price, Richard (1723–1791) FRS, philosopher, demographer, and political radical. Richard Price was the son of Rhys Price, a dissenting minister, and Catherine Richards. Born at Tyn Ton, Llangeinor, Glamorgan, Wales, Richard studied under Vavasor Griffiths at Chancefield, Talgarth. His writings in defence of the American patriots led to an invitation to advise congress conveyed to him by Benjamin Franklin, Arthur Lee, and John Adams. A friend of Thomas Paine, Thomas Jefferson, Adam Smith, David Hume, A member of the intellectual societies the Bowood Group and Benjamin Franklin's 'Club of Honest Whigs'. In 1772 Price recruited Joseph Priestley to the Bowood Group. It was through her friendship with Price that then unpublished Mary Wollstonecraft met the radical publisher Joseph Johnson. Price helped her to visit Lisbon to see Fanny Blood. She published 'A Vindication on the rights of men' in response to Burke's attack on Price, and her 'Vindication on the rights of woman' extended Price's arguments on equality for women.

Rev. JOSEPH COCKIN (1755-1828). Author and non-conformist minister. "He was a fearless, zealous, able, and devoted minister. He preached annually at some of the large chapels in London, where his ministry was very acceptable and useful. He also preached before the London Missionary Society in 1798, and was largely occupied in public services in his own county."

Marbled boards
...[more]
ffep
A common abbreviation for Front Free EndPaper. Generally, it is the first page of a book and is part of a single sheet that...[more]
calf
Calf or calf hide is a common form of leather binding.  Calf binding is naturally a light brown but there are ways to treat...[more]
octavo
Another of the terms referring to page or book size, octavo refers to a standard printer's sheet folded four times, producing...[more]
acceptable
A non-traditional book condition description that generally refers to a book in readable condition, although no standard exists...[more]
spine
The outer portion of a book which covers the actual binding. The spine usually faces outward when a book is placed on a shelf....[more]
First Edition
In book collecting, the first edition is the earliest published form of a book. A book may have more than one first edition in...[more]
New
A new book is a book previously not circulated to a buyer. Although a new book is typically free of any faults or defects,...[more]
edges
The collective of the top, fore and bottom edges of the text block of the book, being that part of the edges of the pages of a...[more]
crisp
A term often used to indicate a book's new-like condition. Indicates that the hinges are not loosened. A book described as crisp...[more]
gilt
The decorative application of gold or gold coloring to a portion of a book on the spine, edges of the text block, or an inlay in...[more]