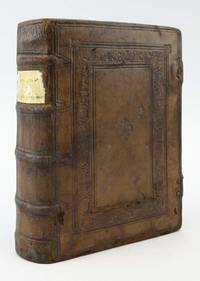 London: John Day, 1571 [i.e., 1572]. Apparently the FIRST PRINTING of this collection. 210 x 143 mm. (8 1/4 x 5 1/2"). [2], 21, 23-124, 219, [1] (blank) leaves. Wanting, as often, c6 (woodcut of Latimer preaching), and bound without the title-page and preliminaries to the second part (Seven Sermons, made upon the Lordes Prayer). Three parts in one volume. EXCELLENT CONTEMPORARY LONDON CALF over wooden boards, covers with frames of blind rules and medallion roll with portraits of Martin Luther, Philip Melanchthon, Erasmus, and John Huss (Oldham 493/795, signed F. D.), raised bands, later paper label, pastedowns lifted showing wooden boards, stitching, and vellum binder's waste from an earlier manuscript with music, lacking two fore-edge clasps. In a brown buckram drop-back box. Historiated woodcut initials, two elaborate woodcut title page borders, vignette printer's device at end. Front pastedown with early ownership inscription: "This is William Hill his booke." STC 15277. For the binding: Oldham, "English Blind-Stamped Bindings," p. 32, plates XXXIII and XLVIII. Boards with half a dozen small patches of lost patina from insect activity, a handful of minor abrasions, leather on spine a little crackled, but the unsophisticated binding quite solid and pleasing; a tiny wormhole touching a couple of leaves but never affecting legibility, occasional trivial stains, otherwise A FINE, FRESH COPY, clean and crisp internally. This is an especially appealing unsophisticated copy of a collection of compelling sermons by one of the moving forces in the reform movement in England. From his position as bishop of Worcester and advisor to Henry VIII, Latimer (ca. 1485-1555) exerted a remarkable influence in the rise of English Protestantism. According to Britannica, it was "the preaching of Latimer more than the edicts of Henry that established the principles of the Reformation in the minds and hearts of the people; and from his preaching, the movement received its chief color and complexion. . . . It is possible to learn from them more regarding the social and political condition of the period than perhaps from any other source, for they abound, not only in exposures of religious abuses, and of the prevailing corruptions of society, but in references to many varieties of social injustice and unwise customs, in racy sketches of character, and in vivid pictures of special features of the time." Though Latimer has been seen as accommodating his religious views to Henry's political purposes, his sermons reflect considerable courage in that they attack corruption and hypocrisy in churchmen of all denominations. Like others in the forefront of the English Reformation, Latimer was subject to turbulent reversals of fortune, and when Mary ascended to the throne, he was defined as a heretic and died in flames. According to Oldham, binder F. D. was active in London from 1554 to 1580 and was almost certainly a German immigrant. Oldham suspects that the crowding of his initials (on either side of the head of Philip Melanchthon) is the result of their addition to an existing German roll. English bindings from this period, especially if on books that might well have encountered frequent use, are seldom found in the fine state of preservation seen here.

title page
A page at the front of a book which may contain the title of the book, any subtitles, the authors, contributors, editors, the...[more]
crisp
A term often used to indicate a book's new-like condition. Indicates that the hinges are not loosened. A book described as crisp...[more]
spine
The outer portion of a book which covers the actual binding. The spine usually faces outward when a book is placed on a shelf....[more]
device
Especially for older books, a printer's device refers to an identifying mark, also sometimes called a printer's mark, on the...[more]
raised band(s)
Raised bands refer to the ridges that protrude slightly from the spine on leather bound books.  The bands are created...[more]
vellum
Vellum is a sheet of specialty prepared skin of lamb, calf, or goat kid used for binding a book or for printing and writing. ...[more]
fine
A book in fine condition exhibits no flaws. A fine condition book closely approaches As New condition, but may lack the...[more]
vignette
A decorative design or illustration placed at the beginning or end of a ...[more]
calf
Calf or calf hide is a common form of leather binding.  Calf binding is naturally a light brown but there are ways to treat...[more]
buckram
A plain weave fabric normally made from cotton or linen which is stiffened with starch or other chemicals to cover the book...[more]
leaves
Very generally, "leaves" refers to the pages of a book, as in the common phrase, "loose-leaf pages." A leaf is a single sheet...[more]