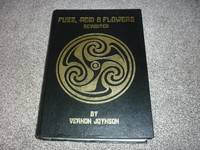 UK: Borderline Productions. VG condition Note postage will be calculated once I get the order and know your location . These two books are very heavy.

The Ultimate Guide to US Psych / Garage / Hippie Rock!

Originally published in paperback but this one is the Deluxe, Gold-Foil-Embossed Faux-Leather Hardback!

Limited Edition 750 machine-numbered copies only! This is the No 222

The most detailed guide to US psychedelia, garage and hippie-rock of the 1964-1975 era ever published! It provides an A-Z listing of relevant artists with discographies, personnel details, band histories, comment on the music and, in some cases, includes the personal recollections of band members Individual entries also include details of reissues, appearances on retrospective compilations and chart entries There is also a rarity scale for albums

At the end of the book, which has been assembled with the help of avid record collectors, there is a list of all compilations referred to with the label details and year of release as well as discographies for three leading sixties reissue labels: Sundazed, Gear Fab and Akarma

Vernon Joynson's name has become synonymous with two massive, pioneering works of pop scholarship, The Tapestry Of Delights and Fuzz, Acid & Flowers This long-awaited limited reprint of the latter covers almost every aspect of American popular music of the 60s and 70s

Spread over 1,100 pages are a vast number of acts (spanning folk, blues, rock, pop, jazz and beyond), with personnel, discographies and a rarity scale offered alongside overviews of their careers and a multitude of illustrations With contributions from many of the world's leading pop experts and collectors, this lovingly-compiled and endlessly fascinating book deserves space on every serious music fan's bookshelf.

What makes this edition especially desirable is that it is a strictly limited heavyweight hardback printing of a mere 750 copies.

Seller rating:
This seller has earned a 5 of 5 Stars rating from Biblio customers.
Biblio.com member since: 2017
Lochwinnoch, Renfrewshire
Ask Seller a Question

I specialise in books about rock music, mainly on artists from the 70's and have several rare publications by Genesis Publications. If you have any special needs then please email me at david300454@yahoo.co.uk.

reprint
Any printing of a book which follows the original edition. By definition, a reprint is not a first edition.
VG
Very Good condition can describe a used book that does show some small signs of wear - but no tears - on either binding or...[more]