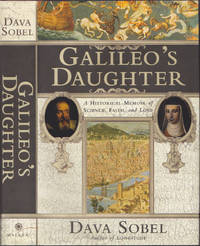 Galileo's Daughter: A Historical Memoir of Science, Faith, and Love

Galileo's Daughter: A Historical Memoir of Science, Faith, and Love

New York: Walker Books, October 1999. Hardcover. First Edition / full number line. As New book in an As New jacket. Not a remainder. Not damaged. Not from a library. 384 pages.

Of Galileo's three illegitimate children, the eldest best mirrored his own brilliance, industry, and sensibility, and by virtue of these qualities became his confidante. Born Virginia in 1600, she was thirteen when Galileo placed her in a convent near him in Florence, where she took the most appropriate name of Suor Maria Celeste. Her loving support, which Galileo repaid in kind, proved to be her father's greatest source of strength throughout his most productive and tumultuous years. Her presence, through letters which Sobel has translated from their original Italian and masterfully woven into the narrative, graces her father's life now as it did then. Galileo's Daughter dramatically recolors the personality and accomplishment of a mythic figure whose seventeenth-century clash with Catholic doctrine continues to define the schism between science and religion. Moving between Galileo's grand public life and Maria Celeste's sequestered world, Sobel illuminates the Florence of the Medicis and the papal court in Rome during the pivotal era when humanity's perception of its place in the cosmos was about to be overturned. In that same time, while the bubonic plague wreaked its terrible devastation and the Thirty Years' War tipped fortunes across Europe, one man sought to reconcile the Heaven he revered as a good Catholic with the heavens he revealed through his telescope.

A Historical Memoir of Science, Faith, and LoveInspired by her long fascination with Galileo, and by the remarkable surviving letters of his daughter, which she has translated into English for the first time, Dava Sobel has written a book of great originality and power, a biography unlike any ever written on the man Albert Einstein called “the father of modern physics – indeed of modern science altogether.”Galileo Galilei (1564-1642) was the foremost scientist of his day. Though he never left italy, his birthplace, his inventions and discoveries were heralded around the world. His telescopes allowed him to reveal a new reality in the heavens and to publicly propound the astounding argument that the Earth actually moves around the Sun. For this belief he was brought before the Holy Office of the Inquisition, accused of heresy, and threatened with torture. In contrast, his daughter Virginia, became a cloistered nun. Born in 1600, she was thirteen when Galileo placed her in a convent near him in Florence, where she took the most appropriate name of Suor Maria Celeste. Galileo later said of her that she had an “exquisite mind,” and her intelligence and loving support proved to be her father’s greatest source of strength through his most difficult years.“I had two daughters who were nuns and whom I loved dearly, but the eldest in particular, who was a woman of exquisite mind, singular goodness, and most tenderly attached to me.” – Galileo Galilei (July 28, 1634)Galileo’s Daughter brings Galileo to life as never before—boldly compelled to explain the truths he discovered, human in his frailties and faith, devoted to family and, especially, to his daughter. Her presence graces his life now as it did then. Their voices, and those of others who touched their lives, echo down the centuries through letters and writings, which Sobel masterfully weaves into her narrative, building toward the crescendo of history’s most dramatic collision between science and religion. In the process, she illuminates an entire era, when the flamboyant Medici grand dukes became Galileo’s patrons, when the bubonic plague wreaked its terrible devastation and prayer was the most effective medicine, when the Thirty Years’ War tipped fortunes across Europe, and when one man fought, through his trial and betrayal by his former friend, Pope Urban VIII, to reconcile the Heaven he revered as a good Catholic with the heavens he revealed through his telescope. An unforgettable story, Galileo’s Daughter is a stunning achievement.

"Introduces us to the man whose belief that the Earth moved around the sun caused him to be brought before the Holy Office of the Inquisition, accused of heresy, and threatened with torture. In contrast, his daughter Virginia chose the quiet life of a cloistered nun. Sobel takes us through the trials and triumphs of Galileo's career and his familial relationships, and simultaneously illuminates an entire era of flamboyant Medici Grand Dukes, the bubonic plague, and history's most dramatic collusion between science and religion."

remainder
Book(s) which are sold at a very deep discount to alleviate publisher overstock. Often, though not always, they have a remainder...[more]
jacket
Sometimes used as another term for dust jacket, a protective and often decorative wrapper, usually made of paper which wraps...[more]
number line
A series of numbers appearing on the copyright page of a book, where the lowest number generally indicates the printing of that...[more]
First Edition
In book collecting, the first edition is the earliest published form of a book. A book may have more than one first edition in...[more]