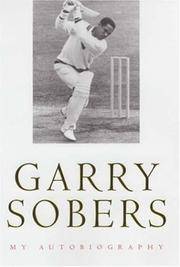 by SOBERS, GARY with HARRIS, BOB:

UK,8vo HB+dw/dj,1st edn..[Complete number line 10-1 descending.] FINE/FINE.No owner inscrptn and no price-clip to dw/dj.Bright,crisp,clean, glossy laminated,subject's portrait b/w photographic illustrated dw/dj panels,with gilt and red lettering; with negligible shelf-wear or creasing to edges and corners - no nicks or tears present.Front cover b/w photograph repeated as thumbnail to head of spine is lightly sunned/ faded - as usual/normal.Top+fore-edges though lightly toned,still bright and clean; contents bright,tight,clean,solid and sound - pristine - no dog-ear reading creases to any pages' corners, appears unread - apart from my own collation.Bright,crisp,clean,sharp-cornered,publisher's original plain black cloth boards with bright,crisp,stamped gilt letters to spine/backstrip and plain maroon endpapers - ffe with a couple of fluid splashes to it's fore-edge.UK,8vo HB+dw/dj,1st edn,1-342pp [paginated] includes a prologue,24 chapters,24pp of contemporary b/w (16pp) and colour (8pp) autobiographical photographs in 3 blocks of 8pp apiece, between pp88/9,pp184/5 and pp248/9 respectively,an appendix of Career Record and an index,plus [unpaginated] half-title+title pages, contents list/table and acknowledgements and 2pp blanks at the rear.
Gary Sobers is,quite simply,a legend.He is acknowledged worldwide as the greatest all-rounder cricket has ever seen.In this,his definitive autobiography,he recalls the records,the runs,the wickets and the catches that prompted the game's other greats,like his friend the late Sir Doanld Bradman,to eulogise over his ability. But Sobers' look back on his life is much more than the bare statistics of a first-class career that began with his debut for Barbados against India in 1953 and continued until he finally retired in 1974.In it he reveals the pain caused by the fatal crash crash which killed his closest friend,and the surprising fact that if he could do it all over again he would choose golf above his beloved cricket.He also provides authoritative views on the current state of the game and the future of cricket. Sir Garfield represented his island in international competition in golf, football as a goalkeeper,table tennis and,more recently,dominoes! But the stuff of legends came from his cricket.An aggressive and record-breaking left-hand bat,he was a world-class bowler with both his quick bowling and his varied left-arm spin,which earned him his Test debut against England at the age of 17.He could also,to coin a phrase,catch pigeons in the field.But the records tell only half the story.This book tells the rest. Sir Garfield St Aubrun Sobers was born in Bridgetown, Barbados,in 1936.He payed 93 Tests for the West Indies,scoring 8,032 runs,with 26 centuries including 365 not out in 1958 at the age of 21 against Pakistan,a record which stood until 1994,beaten by his young pupil Brian Lara.He took 235 test wickets and held on to 109 catches.In his first-class career for Barbados,Nottinghamshire and South Australia, he scored a staggering 28,315 runs and took 1,043 wickets and set another record when he hit Glamorgan's Malcolm Nash for six successive sixes of a six-ball over in Swansea.He was knighted at the Garrison Savannah in his beloved Barbados in 1975 where he has been officially named one of ten National Heroes and honoured in every conceivable way. Bob Harris,who worked with Sir Garfield on his autobiography,is one of Britain's most respected sports writers.He has worked for several national newspapers as a sports writer and sports editor,and launched the UK's first all-sports newspaper, 'Sport First'.He has co-authored bestselling books with Sir Viv Richards,Bobby Robson,Stuart Pearce and Kevin Keegan. Since April 2013,again in March 2015,and in this year too,the UK Post Office has altered it's Pricing in Proportion template,altering it's prices, weight allowances,dimensions and lowered it's qualifying compensation rates too!
So,please contact rpaxtonden@blueyonder.co.uk ,for correct,insured shipping/P+p quotes - particularly ALL overseas buyers - BEFORE ordering through the order page!

edges
The collective of the top, fore and bottom edges of the text block of the book, being that part of the edges of the pages of a...[more]
spine
The outer portion of a book which covers the actual binding. The spine usually faces outward when a book is placed on a shelf....[more]
gilt
The decorative application of gold or gold coloring to a portion of a book on the spine, edges of the text block, or an inlay in...[more]
Cloth
"Cloth-bound" generally refers to a hardcover book with cloth covering the outside of the book covers. The cloth is stretched...[more]
number line
A series of numbers appearing on the copyright page of a book, where the lowest number generally indicates the printing of that...[more]