Rare books Travel and Exploration More Rare Books from Michael Treloar Antiquarian Booksellers The Gawler Handbook. A Record of the Rise and Progress of that important Town; to which are added Memoirs of… 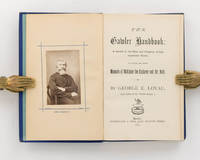 The Gawler Handbook. A Record of the Rise and Progress of that important Town; to which are added Memoirs of McKinlay the Explorer and Dr Nott

The Gawler Handbook. A Record of the Rise and Progress of that important Town; to which are added Memoirs of McKinlay the Explorer and Dr Nott

Adelaide: Goodfellow & Hele [almost certainly the Author - James Dally was convinced], 1880. First Edition. Hardcover. Very Good. Adelaide, Goodfellow & Hele [almost certainly the Author - James Dally was convinced], 1880. Octavo, 182, 30 (advertisements) pages plus 6 lithographed plates (of farm machinery by James Martin & Co.) and 17 albumen paper carte de visite photographs individually mounted on tipped-in captioned leaves. Blind-decorated blue cloth lettered in gilt on the front cover; cloth slightly rubbed and bumped at the extremities, a little marked and bubbled, and lightly sunned on the spine; some mounts lightly creased (a production flaw); a few trifling signs of use; a very good copy (but internally fine, with the photographs in superb condition). With the pictorial bookplate of J. Cluny Harkness (Federal President of the Chamber of Manufactures in the 1950s, according to Trove). Ferguson 11744; Holden 70. Holden's entry is more accurate and informative, although the photographs may vary slightly between copies. The photograph facing page 17 in this copy is of the 'Gawler Institute' (showing the Institute building and Town Hall), rather than 'Frankel's Hotel' as called for in Holden. These variations notwithstanding, two separate editions were produced: one in wrappers, with advertisements on the verso of the front cover and on both sides of the rear cover, without photographs (but with the lithographs not noted by Ferguson); the other in gilt-lettered cloth, without the cover advertisements, containing 17 mounted photographs plus the lithographs. Both contain 30 pages of advertisements at the rear. Rare in any state, and in our view, the version on offer is one of the more important and interesting photographically illustrated books produced in Australia. 'The handbook is illustrated with a number of views by Mr J. Taylor, the local photographic artist, representing the most important edifices and establishments in town' (Holden, quoting a contemporary review). The frontispiece is a portrait of John McKinlay (1819-1872); there are 14 pages devoted to him (he married a Gawler woman in the early 1850s and was based in the town until his death). Justice is not done to the other photographs in describing them prosaically as 'the most important edifices and establishments in town'. Without exception, signs of life and day-to-day activities flesh out the images, and most of the businesses - butcher shop, photographic studio, cordial factory, furnishing warehouse, music emporium - feature well-stocked windows or yards and numerous staff members or customers. Holden reproduces two interesting ones (including perhaps the best, the butcher shop, captioned merely 'Hodgson & Clements'), but there are wonderful vignettes in many others. Not least of these are the horse-drawn tram in front of the 'Commercial Bank', and the ornate hearse outside 'F. Fowler's Furnishing Warehouse'. While we are on the subject of death, one chapter stands out. Among those to be expected, say on 'Horticultural and Agricultural Progress. Gardens around Gawler', or 'The Humbug Society. Flam! Bam! Sham!', or 'The Streets - Number of Businesses - Description of Hotels', there is Chapter XI: 'The Neville and Adamson Tragedy'. Its thirteen pages describe in great detail the events surrounding the double suicide 'and its romantic accomplishment' of Neville and his partner Adamson. 'It is universally believed that Neville was the leading spirit in the suicide, and so strong was Adamson's affection, love, friendship, or whatever it may be termed, for his companion, that he consented to take that final leap in the dark in the wine cellar, with him to visit that "bourne whence none return"'.

octavo
Another of the terms referring to page or book size, octavo refers to a standard printer's sheet folded four times, producing...[more]
bookplate
Highly sought after by some collectors, a book plate is an inscribed or decorative device that identifies the owner, or former...[more]
sunned
Damage done to a book cover or dust jacket caused by exposure to direct sunlight.  Very strong fluorescent light can cause...[more]
First Edition
In book collecting, the first edition is the earliest published form of a book. A book may have more than one first edition in...[more]
wrappers
The paper covering on the outside of a paperback.  Also see the entry for pictorial wraps, color illustrated coverings for...[more]
leaves
Very generally, "leaves" refers to the pages of a book, as in the common phrase, "loose-leaf pages." A leaf is a single sheet...[more]
gilt
The decorative application of gold or gold coloring to a portion of a book on the spine, edges of the text block, or an inlay in...[more]
verso
The page bound on the left side of a book, opposite to the recto page.
fine
A book in fine condition exhibits no flaws. A fine condition book closely approaches As New condition, but may lack the...[more]
Cloth
"Cloth-bound" generally refers to a hardcover book with cloth covering the outside of the book covers. The cloth is stretched...[more]