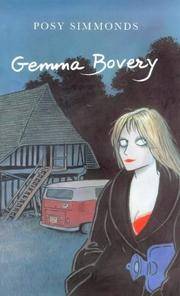 UK,slim,rectangular Qrto s/back,no dw/dj - as issued,1st edn thus. [The true UK,1st edn was published 1999,by same publisher,but in hardback format.Believed a simultaneous s/back issue (?) - as stated Jonathan Cape,1999 with full number line 2 4 6 8 10 9 7 5 3 1 to copyright page.] FINE+.No owner inscrptn.Bright,clean, matt, wrap-around colour pictorial artwork by Posy Simmonds,illustrated card wraps; with negligible shelf-wear and creasing to edges and corners - no nicks or tears present and no reading creases to spine/backstrip.Top+fore-edges bright and clean,contents bright, tight and near pristine - no dog-ear reading creases to any pages' corners - an unread copy? UK,slim,narrow Qrto wraps,1st edn thus,1-106pp [paginated] b/w comic strip stories,by Posy Simmonds,and text,an epilogue,plus [unpaginated] half-title+title-pages,and dedication. Rosemary Elizabeth "Posy" Simmonds (b 9/8/1945) is a British newspaper cartoonist and writer and illustrator of children's books.Born in Berkshire and educated at a boarding school,the Sorbonne and studied at the Central School of Art & Design, London.She is best known for her long association with The Guardian, for which she now draws a cartoon titled Tamara Drewe.She started her newspaper career drawing a strip for The Sun in 1969 before joining The Guardian as an illustrator in 1972.In 1979 she started drawing a weekly comic strip for The Guardian,initially titled 'The Silent Three of St. Botolph's' as a tribute to the 1950's strip,'The Silent Three' by Evelyn Flinders. The strip focused on three 1950's schoolfriends in their later, middle-class and nearly middle-aged lives: Wendy Weber,a former nurse married to polytechnic sociology lecturer George with a large brood of children; Jo Heep,married to whisky salesman Edmund with two rebellious teenagers; and Trish Wright,married to philandering advertising executive Stanhope with a young baby. The strip,which was latterly untitled and usually known just as "Posy",ran until the late 1980's.It was collected into a number of books: 'Mrs Weber's Diary', 'Pick of Posy','Very Posy' and 'Pure Posy',and one original cartoon book featuring the same characters,'True Love'. Her later cartoons for The Guardian and The Spectator were collected as 'Mustn't Grumble',in 1992. Posy Simmonds' first graphic novel,'Gemma Bovery' was acclaimed by the critics for its wit and wickedly sharp observation.A.N. Wilson called it 'a work of genius' and more than one reviewer suggested that it should be entered for the Booker prize. She is also the author of many books for adults and children - see also rja1787, rja24337,rja27787,rja465313 and rja511215 (the last 2 numbers are duplicate copies of same title) respectively - including 'Literary Life','Lulu and the Flying Babies' and 'Fred',the film of which was nominated for an Oscar.She has contributed a series of weekly cartoon strips to the 'Guardian' newspaper since 1977,and has won international awards for her work. Please contact rpaxtonden@blueyonder.co.uk ,because of the lighter weight of this item,for correct shipping/P+p quotes - particularly ALL overseas buyers - BEFORE ordering through the order page!

Posy Simmonds is best known for her cartoon strip in the Guardian featuring the Weber family. Her previous books include Mustn't Grumble , Mrs. Weber's Diary , True Love and Pure Posy , as well as several children's books.

Copyright page
The page in a book that describes the lineage of that book, typically including the book's author, publisher, date of...[more]
tight
Used to mean that the binding of a book has not been overly loosened by frequent use.
number line
A series of numbers appearing on the copyright page of a book, where the lowest number generally indicates the printing of that...[more]
edges
The collective of the top, fore and bottom edges of the text block of the book, being that part of the edges of the pages of a...[more]