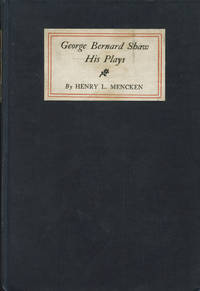 Crusading author, journalist, editor, and activist Carey McWilliams (1905-1980), as a teenager read H. L. Mencken and F. Scott Fitzgerald, and organized his life according to the Jazz Age dictates as he understood them:

I was sixteen when I enrolled at the University of Denver. By that time I was very much interested in books and had scribbled notes for a kind of a novel about that part of the West. Of course I never wrote it. But I was interested in writing and books. And I read Scott Fitzgeralds This Side of Paradise the year before I enrolled in the University of Denver. It made a great impression on me; I thought this was a wonderful book. And then when I was in the University of Denver, I worked on the paper, the school paper, and so forth. I had discovered Mencken in the meantime, and I bought every copy of the Smart Set as soon as it appeared. I would race down to the newsstand for the latest copy and read all the books Mencken commended.

A few years later, McWilliams read a Mencken column in The American Mercury that suggested the need for a biography of Ambrose Bierce. Following that lead, McWilliams composed a profile of Bierce for the literary magazine at USC, where he was then a student, and then sent the piece to The Argonaut, the paper once edited by Bierce and still being published in San Francisco. He sent the published piece to his hero, along with a letter. On receipt of Menckens response, he wrote in his diary, Got a short letter from my idol H. L. Mencken yesterday and needless to say I was just too darned tickled to speak  could only yell and shout persistently. Mencken encouraged McWilliams to pursue his plans to research and write about Bierces life; the result was McWilliamss first book, ultimately published in the fall of 1929 (having been previewed earlier that year with a long profile in The American Mercury).

In October 1926, Mencken had contacted McWilliams to say that he would be in Los Angeles for a few days on his way to see George Sterling in San Francisco (who McWilliams had gotten to know well, at Menckens suggestion). Sterling had been Bierces protege, and one among the many figures whom McWilliams had interviewed while working on his biography of Bierce. McWilliams went to meet Mencken for the first time, at the Ambassador Hotel, describing it as the high point of my year  and quite evidently the occasion for the inscription in this book.

McWilliams went on to write more than a dozen books, including Factories in the Field (about migrant workers, called by some the nonfiction Grapes of Wrath) as well as others dealing with the treatment of immigrants and minorities (Brothers Under the Skin, Prejudice, North from Mexico, A Mask for Privilege), and two portraits of the state of California, Southern California Country: An Island on the Land (the inspiration for the screenplay for the film Chinatown) and California: The Great Exception (books that pave the way for the work of writers like Mike Davis). McWilliams worked tirelessly for progressive causes, as an activist, state official, journalist, and as editor of The Nation for twenty years, 1955-1975. Though known to specialists, and acclaimed by peers and followers, his work has yet to reach the wider audience that it deserves.

A marvelous association, and a token of a historic occasion in the life of an undersung hero of American life and letters.

All books are first editions in very good or better condition unless otherwise noted. Dustjackets are noted when present. Books will be held for one week unless other arrangements are made, and all purchases are returnable for any reason with advance notification. Institutional billing is available with standard terms.

Seller rating:
This seller has earned a 5 of 5 Stars rating from Biblio customers.
Biblio.com member since 2008
Portland, Oregon
Ask Seller a Question

Passages Bookshop stocks fine, rare, and unusual books and graphic art, with a concentration on modern and contemporary literature and art (particularly poetry and the avant-garde), artist's books, fine printing, and the book arts. The successor to New York City's Bridge Bookshop (late 1980s), Passages opened in Albuquerque in 1994 and relocated to Portland, Oregon, in 1997. In November of 2015 we moved to a new retail shop and gallery centrally located in Portland's east side, two blocks north of the convention center, where we are typically open Thursday through Saturday from 12:00 to 6:00 pm, as well as by appointment or chance. Proprietor: David Abel, info@passagesbookshop.com

inscribed
When a book is described as being inscribed, it indicates that a short note written by the author or a previous owner has... [More]
spine
The outer portion of a book which covers the actual binding. The spine usually faces outward when a book is placed on a shelf.... [More]
spine label
The paper or leather descriptive tag attached to the spine of the book, most commonly providing the title and author of the... [More]
Cloth
"Cloth-bound" generally refers to a hardcover book with cloth covering the outside of the book covers. The cloth is stretched... [More]