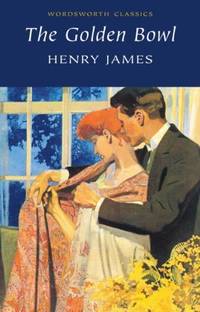 Wordsworth Editions Ltd. New. Wordsworth Press, Paperback, 2001, Book Condition: New, With an Introduction and Notes by Nicola Bradbury, University of Reading Henry James's last completed novel, The Golden Bowl, is the story of two flawed marriages. The lives and relationships of Maggie Verver and her widowed American millionaire father, Adam, are changed and challenged by the beautiful and charming Charlotte Stant, who is the former lover of Maggie's husband, the impoverished Italian, Prince Amerigo. The narrative is underpinned by complex symbolism. The gilded crystal bowl with its almost invisible flaw is the vehicle which James uses to reveal past misdemeanours and make his characters face their own defects in this classic tale of redemption. . 2001. TRADE PAPERBACK.

The Golden Bowl, Henry James’ last completed novel, is widely considered to be one of the author’s best works (along with The Ambassadors and The Wings of a Dove). In it, James continues to explore his favored themes of marriage, money, and psychological warfare. The novel, set in England, tells the story of American heiress Maggie Verver, who is engaged to Amerigo, an impoverished Italian prince. Maggie’s father, Adam, travels to London for the wedding and meets Charlotte Stant, a friend of both Maggie and the prince. In a nutshell, The Golden Bowl is about Maggie’s education on marriage, adultery, and the aftermath. The title of the novel comes from a Biblical passage, Ecclesiastes 12:6-7: "Or ever the silver cord be loosed, or the golden bowl be broken, or the pitcher be broken at the fountain, or the wheel broken at the cistern… then shall the dust return to the earth as it was…” The golden bowl, first seen in a London curio shop, is used emblematically throughout the novel. The Golden Bowl is ranked 32nd on Modern Library’s “100 Best” English-language novels of the 20th century and 36th on The Guardian’s list of the 100 best novels. Adaptations include the highly praised 1972 BBC six-hour-long televised version and the 2000 film directed by James Ivory, starring Uma Thurman, Nick Nolte, Kate Beckinsale, and Jeremy Northam.

Seller rating:
This seller has earned a 5 of 5 Stars rating from Biblio customers.
Biblio.com member since 2018
Port Neches, Texas
Ask Seller a Question

Fleur Fine Books carries a wide range of books including a very large selection of Science Fiction & Fantasy, we are constantly adding to our Texana section, we carry many signed editions, including signed limited editions and books signed in our store during author visits.

New
A new book is a book previously not circulated to a buyer. Although a new book is typically free of any faults or defects,... [More]
trade paperback
Used to indicate any paperback book that is larger than a mass-market paperback and is often more similar in size to a hardcover... [More]