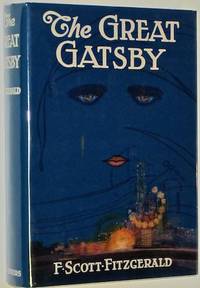 New York: Charles Scribner's Sons, 1925. FIRST EDITION / FIRST PRINTING. First Printing, with all required points in accordance with the Fitzgerald bibliography by Bruccoli: 1925 on the title and copyright pages. The Scribner's Seal on the copyright page. And all typing errors: 1) Page 60, line 16 says "chatter". 2) Page 119, line 22 says "northern". 3) page 205, lines 9-10 says "sick in tired". 4) Page 165, line 16 says "it's", and on line 29 (the bottom line) space after "away". 5) Page 211, lines 7-8 says "Union Street station". This book was originally issued with a dust jacket that is now virtually unobtainable, and not included with this copy. Copies of the dust jacket are seldom seen, with the few that are available, and still intact, listed between one-hundred and five-hundred thousand dollars. The book alone retails at roughly one percent of the value of it's dust jacket. Bound in the publisher's green woven cloth binding. The spine embossed in gilt, with the cover blindstamped, as issued. A fairly simple, yet pleasing binding. 218 pages. This book comes together with a facsimile (reproduction) dust jacket, for protection and aesthetics. The facsimile jacket is protected in a removable archival plastic dust jacket, as well. There is some general usage wear and abrasion. The gilding to the spine is predominantly intact, often found rubbed off. The hinges are sound. The internal hinge paper shows some separation, as is often seen with this book. Some generalized signs of usage, infrequent thumbing, some foxing but more prevalent to the first few pages, a couple page creases. A large number of pages with ballpoint ink predominantly in the margins, with some evidence or archival conservation to remove it. Complete and intact. The rear blank end paper with a tiny edge chip and crease. No previous signs of ownership. Small inconspicuous ink stamp at the bottom of the rear pastedown. A very presentable copy of this American classic. Although The Great Gatsby garnered critical acclaim when it was first published, at the time of Fitzgeralds death in 1940 at age 44, he had largely been dismissed as a writer who failed to reach his full, promising potential. However, Bruccoli notes that a "resurrection" of Fitzgerald began during World War II, when copies of The Great Gatsby were distributed by the Armed Services Editions program. The novels popularity soared and has never waned since then; The Great Gatsby is now secure in the canon of American literature. (Bruccoli A11.I.a) First published on April 10, 1925, it is set on Long Island's North Shore and in New York City during the summer of 1922. It is a critique of the American Dream. The original run consisted of just over 20,000 copies, and it was not until after World War II that Fitzgerald reached the height of his fame. It is one of the most sought after first editions in American literature. All books are professionally wrapped, to help ensure safe handling during transit. We regularly ship internationally. And, we offer a full refund guarantee, per our terms as described on our site, with notification of such intent requested. Additional photographs are available. Please contact us with any inquiries.

facsimile
An exact copy of an original work. In books, it refers to a copy or reproduction, as accurate as possible, of an original...[more]
Copyright page
The page in a book that describes the lineage of that book, typically including the book's author, publisher, date of...[more]
Cloth
"Cloth-bound" generally refers to a hardcover book with cloth covering the outside of the book covers. The cloth is stretched...[more]
gilt
The decorative application of gold or gold coloring to a portion of a book on the spine, edges of the text block, or an inlay in...[more]
spine
The outer portion of a book which covers the actual binding. The spine usually faces outward when a book is placed on a shelf....[more]
hinge
The portion of the book closest to the spine that allows the book to be opened and closed.
jacket
Sometimes used as another term for dust jacket, a protective and often decorative wrapper, usually made of paper which wraps...[more]
First Edition
In book collecting, the first edition is the earliest published form of a book. A book may have more than one first edition in...[more]