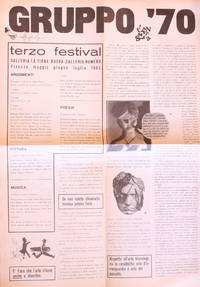 Double-sided poster containing: the program of the festival, taking place through May, June, and July of 1965; lists of participants which included Mario Bucci, Sylvano Bussotti, Giuseppe Chiari, Emilio Isgrò, Lucia Marcucci, Lamberto Pignotti, Aldo Rossi, Adriano Spatola, Luigi Tola, Antonio Bueno, Silvio Loffredo, Elio Marchegiani, Luciano Ori, Dick Higgins, Philip Corner, John Cage, Yoko Ono, Wolf Vostell, Nam June Paik, Bazon Brock, Toshiro Mayuzumi, Nanni Balestrini, George Brecht, Charlotte Moorman, and others; some texts and manifestoes regarding music, poetry, and concrete/visual poetry; a poem "Robot Opera" by Nam June Paik; reproductions of works by 12 artists and a brief biographical statement on each; and some additional graphics and designs. 50 x 35 cm. Some slight yellowing, minor chipping along top edge, creasing, overall very good. Firenze (Galleria La Vigna Nuova/Galleria Numero) 1965. Gruppo 70 was an Italian neo-avant-garde collective established in May 1963, following the Arte e comunicazione conference promoted by Lamberto Pignotti, Eugenio Miccini, Sergio Salvi, and Silvio Ramat. The group was made up of poets, writers, critics, artists, and musicians and based primarily in the experimental art scene of Florence, affiliated with the journal Quartiere and the Nuova Figurazione and Nuova Musica schools of art and music, respectively.
Terzo Festival was, as indicated by the name, the third conference held by the group. It was comprised of a series of art events and intiatives scattered throughout the city, including debates, exhibitions, and concerts, divided into the classifications of Argomenti, Pittura, Musica, and Poesia.
As of February 2022, OCLC locates two holdings of this poster in North American libraries.

chipping
A defect in which small pieces are missing from the edges; fraying or small pieces of paper missing the edge of a paperback, or... [More]