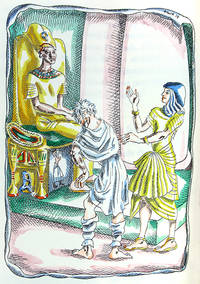 The Haggadah: A New Critical Edition with English Translation, Introduction, and Notes Literary, Historical, and Archaeological

The Haggadah: A New Critical Edition with English Translation, Introduction, and Notes Literary, Historical, and Archaeological

London: Soncino Press, 1930. Rutherston, Albert. Small quarto. xl, (3), 209pp. One of nine copies printed on Roman Vellum, signed by the editor, Cecil Roth, and the illustrator, Albert Rutherston. With fourteen full-page stencilled illustrations, plus seventy small ornaments, all in color. Rutherston's bright depictions of the Passover story, including illustrations of the Jews under Pharaoh, the parting of the Red Sea, the Ten Commandments, and the prophets looking over modern children at play, bring both joy and gravity to the sacred text. Rutherston collaborated with the Curwen Press repeatedly over his career, and this is perhaps one of his most accomplished works, possibly influenced by his years in Palestine while serving in the British Army.

Set in Roman and Italic English type, as well as Hebrew type purchased from Enschedé en Zonen in Holland, the edition embraces the tradition of the pictorial Haggadah while imbuing it with modernity. A Western title page appears at the front of the volume when opened left to right, followed by a publisher's note and an Introduction by Roth describing the historic and spiritual place of the Haggadah. The rest of the volume reads right to left, with Hebrew at the right hand and English translation and glosses at the left. The result is an inviting, impressive edition, beautiful to the layperson and the intitiated.

Bound in full green morocco by Henry T. Wood, Ltd., a progressive London firm whose exceptional giltwork is on display here in the tooled depiction of candles and the Torah at the Western lower cover, ruling to inner and outer edges and spine bands, and spine titles in Hebrew and English. Metal clasps. Some soiling to exterior, inconsequential stain to lower corner of text block, else fine. A remarkable production. Bookplate of Anne and Robert H. Siskin, prominent members of the Jewish community of Chattanooga, Tennessee, who founded the Siskin Steel Company and whose fortunes established the Siskin Children's Institute and Siskin Hospital for Physical Rehabilitation. (A Spirit of Joy, p. 28).

spine
The outer portion of a book which covers the actual binding. The spine usually faces outward when a book is placed on a shelf....[more]
A.N.
The book is pristine and free of any defects, in the same condition as ...[more]
bookplate
Highly sought after by some collectors, a book plate is an inscribed or decorative device that identifies the owner, or former...[more]
text block
Most simply the inside pages of a book.  More precisely, the block of paper formed by the cut and stacked pages of a...[more]
morocco
Morocco is a style of leather book binding that is usually made with goatskin, as it is durable and easy to dye. (see also...[more]
edges
The collective of the top, fore and bottom edges of the text block of the book, being that part of the edges of the pages of a...[more]
vellum
Vellum is a sheet of specialty prepared skin of lamb, calf, or goat kid used for binding a book or for printing and writing. ...[more]
title page
A page at the front of a book which may contain the title of the book, any subtitles, the authors, contributors, editors, the...[more]
quarto
The term quarto is used to describe a page or book size. A printed sheet is made with four pages of text on each side, and the...[more]