Home Passages Bookshop A Handbook of Protocols for Literary Listening 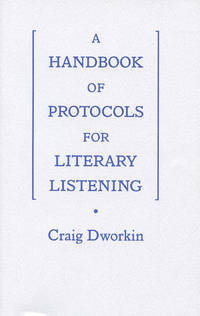 A Handbook of Protocols for Literary Listening

A Handbook of Protocols for Literary Listening

Edinburgh: Arika, 2012. First printing. 36 pp., 8vo. Saddle-stapled into printed self-wrappers. Published for Arikas A survey is a process of listening program as part of the 2012 Whitney Biennial. New.

All books are first editions in very good or better condition unless otherwise noted. Dustjackets are noted when present. Books will be held for one week unless other arrangements are made, and all purchases are returnable for any reason with advance notification. Institutional billing is available with standard terms.

Seller rating:
This seller has earned a 5 of 5 Stars rating from Biblio customers.
Biblio.com member since 2008
Portland, Oregon
Ask Seller a Question

Passages Bookshop stocks fine, rare, and unusual books and graphic art, with a concentration on modern and contemporary literature and art (particularly poetry and the avant-garde), artist's books, fine printing, and the book arts. The successor to New York City's Bridge Bookshop (late 1980s), Passages opened in Albuquerque in 1994 and relocated to Portland, Oregon, in 1997. In November of 2015 we moved to a new retail shop and gallery centrally located in Portland's east side, two blocks north of the convention center, where we are typically open Thursday through Saturday from 12:00 to 6:00 pm, as well as by appointment or chance. Proprietor: David Abel, info@passagesbookshop.com