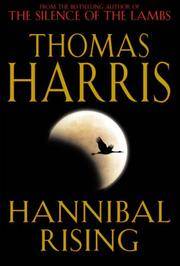 Hannibal Rising is a suspense novel by Thomas Harris, a prequel to his three previous books following the misadventures of his most iconic creation, the sociopathic, murderous cannibal and ex-forensic psychiatrist, Dr. Hannibal Lecter. The novel was released on December 5, 2006 with an initial printing of at least 1.5 million copies and met with a mixed critical response. Audiobook versions has also been released, with Harris reading the text.

New
A new book is a book previously not circulated to a buyer. Although a new book is typically free of any faults or defects,...[more]
gilt
The decorative application of gold or gold coloring to a portion of a book on the spine, edges of the text block, or an inlay in...[more]
tight
Used to mean that the binding of a book has not been overly loosened by frequent use.
edges
The collective of the top, fore and bottom edges of the text block of the book, being that part of the edges of the pages of a...[more]
Cloth
"Cloth-bound" generally refers to a hardcover book with cloth covering the outside of the book covers. The cloth is stretched...[more]