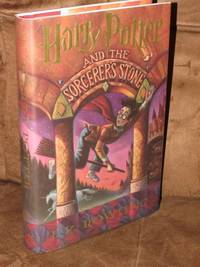 Scholastic Press. Hardback. Fine/Fine. 1997. Hardback. Fine. First American Edition. Fourteenth Print. The First Book in the Harry Potter Series. The book spine and the dust jacket cover do not have the number one, as was used later used to indicate the first year at Hogwarts. This book is a very collectible copy of J.K.Rowling's first book. Dust jacket is protected with a Mylar cover. Books are packed and shipped in boxes.

THIS IS A WONDERFUL BOOK. THE BEST BEGINNING FOR THE BEST SERIES EVER WRITTEN.

Any kind of change in the original book condition will be stated in the its description.

Books can be returned to seller within 30 days of purchase. Condition of the book muist be the same as when shipped. Return shipping will be paid by seller.

Seller rating:
This seller has earned a 5 of 5 Stars rating from Biblio customers.
Biblio.com member since: 2007
Madill, Oklahoma
Ask Seller a Question

fine
A book in fine condition exhibits no flaws. A fine condition book closely approaches As New condition, but may lack the...[more]
spine
The outer portion of a book which covers the actual binding. The spine usually faces outward when a book is placed on a shelf....[more]
jacket
Sometimes used as another term for dust jacket, a protective and often decorative wrapper, usually made of paper which wraps...[more]