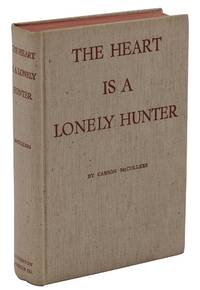 The Heart is a Lonely Hunter

The Heart is a Lonely Hunter

Carson McCullers’ The Heart is a Lonely Hunter is the author’s first in her string of works that lift the voices of the outsiders. The debut novel tells the story of a deaf-mute man named John Singer, who lives in an unnamed mill town in Georgia in the late 1930s. Left alone after his close friend and roommate is sent away, Singer moves into a boarding house and soon becomes the confidant of four of the town’s mistfits. His new acquaintances include Mick Kelly, a spirited young girl from a poor family; Jake Blount, an alcoholic social reformer; Dr. Benedict Mady Copeland, an idealistic black physician; and Biff Brannon, the childless owner of the local café that brought the group together. These five voices share a common cry of isolation, the novel’s principal theme. Thus, some understand the characters experiencing this shared isolation to be grotesque, a Southern Gothic literary term for elements — often exaggerated — in dissension of social and cultural formations. However, others argue that the work is far too rooted in realism to fit the aforementioned bill. Having quickly risen to the top of the bestseller lists in 1940, The Heart is a Lonely Hunter was a literary sensation. Modern Library ranked the novel seventeenth on its list of the “100 Best” English-language novels of the 20th century. It was also included in TIME’s “100 Best Novels” (since 1923 to 2005). A film adaptation was made in 1968, starring Alan Arkin, Sondra Locke, and Cicely Tyson. In March 2005, a stage adaptation premiered at the Alliance Theatre in Atlanta, Georgia and began touring shortly thereafter, commissioned and produced by the Acting Company of New York City. And after being selected for Oprah’s Book Club in 2004, Houghton Mifflin, McCullers's publisher throughout her life, rushed out 700,000 copies of a new paperback edition. As a result, the 64-year-old novel was the No. 1 bestseller for a brief time in May of that year.

Read more: Identifying first editions of The Heart is a Lonely Hunter

Seller rating:
This seller has earned a 4 of 5 Stars rating from Biblio customers.
Biblio.com member since: 2010
Portland, Oregon
Ask Seller a Question

Burnside Rare Books specializes in American and British literature, and rare nonfiction. We are located in downtown Portland, Oregon and open by appointment.

reprint
Any printing of a book which follows the original edition. By definition, a reprint is not a first edition.
fine
A book in fine condition exhibits no flaws. A fine condition book closely approaches As New condition, but may lack the...[more]
buckram
A plain weave fabric normally made from cotton or linen which is stiffened with starch or other chemicals to cover the book...[more]
First Edition
In book collecting, the first edition is the earliest published form of a book. A book may have more than one first edition in...[more]
title page
A page at the front of a book which may contain the title of the book, any subtitles, the authors, contributors, editors, the...[more]
Cloth
"Cloth-bound" generally refers to a hardcover book with cloth covering the outside of the book covers. The cloth is stretched...[more]