Join us October 7–16, 2022 for our upcoming virtual antiquarian book fair!
Preregister now for Biblio.live and get $10 to use at the fair.
Home G.Gosen Rare Books & Old Paper, ABAA, ILAB That Heathen Chinee and Other Poems Mostly Humorous. 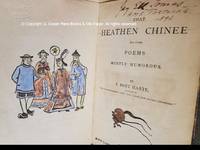 That Heathen Chinee and Other Poems Mostly Humorous.

That Heathen Chinee and Other Poems Mostly Humorous.: By F. Bret Harte, Author of “The Luck of the Roaring Camp” and “Sensation Novels Condensed.”

Bound in quarter green cloth with cloth corners on marbled boards, this copy belonged to Fleet Surgeon John Lloyd Thomas, R.N., H.M.S. "Endymion," with his bookplate pasted in over part of his signature. His book plate is over-stamped with Japanese characters. The book tag of Jiujiya Book Store, at No. 6, Yatozaka, Yokohama, is pasted onto the front endpaper. On the frontispiece is the embossed stamp of the bookseller W. H. Smith & Son, Strand, London. On page 28, Thomas wrote: "Vide page after -60- for continuation of 'Jim.'" On page 58, Thomas signed his name in full: "John Lloyd Thomas." Thomas also inked his initials on the bottom of the text block: "JLLT." On the title page is a curious ink annotation: "Jay Ell Tomas / H.M.S. "PORPOISE." / 1896." Thomas went to China in 1894 on the "Porpoise," but the spelled abbreviations of his name remain a mystery.

Dr. John Lloyd Thomas (1857-1913) became Fleet Surgeon, R.N. in 1900.. From the John Lloyd Thomas obituary in the British Medical Journal, June 14, 1913: "In 1894 he went to China in the "Porpoise", and in the following year attended the wounded Chinese soldiers and sailors at Chefoo during the China-Japanese war; his services were favourably noted, and he was promoted staff-surgeon in 1896. After a term of service from 1897 to 1899 in the Royal Naval Barracks, Portsmouth, he went out-again; to China in the "Endymion" in 1899. In the following year he served with the second Peking Expedition, and the excellent health of the brigade was attributed in a large measure to the sanitary arrangements made under his supervision. He was specially promoted fleet surgeon for these services, and received also from the Emperor of China the Order of the Double Dragon, first division of the third class. He came home in 1902, already unfortunately suffering from the disabling disease which was to shorten his life."

H.M.S., "Endymion" was a first-class protected cruiser of the Edgar class. She served in China during the Boxer Rebellion and later in the First World War, and was sold in 1920. Not to be confused with her storied predecessor of the War of 1812, which was broken up in 1868. Condition good, binding and printing errors as noted above.

verso
The page bound on the left side of a book, opposite to the recto page.
Marbled boards
... [More]
Cloth
"Cloth-bound" generally refers to a hardcover book with cloth covering the outside of the book covers. The cloth is stretched... [More]
vignette
A decorative design or illustration placed at the beginning or end of a ... [More]
plate
Full page illustration or photograph. Plates are printed separately from the text of the book, and bound in at production. I.e.,... [More]
title page
A page at the front of a book which may contain the title of the book, any subtitles, the authors, contributors, editors, the... [More]
bookplate
Highly sought after by some collectors, a book plate is an inscribed or decorative device that identifies the owner, or former... [More]