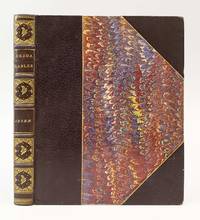 New York: John W. Lovell & Co, 1891. FIRST AMERICAN PRINTING. No. 49 OF 100 COPIES of the Large Paper Edition. 210 x 165 mm. (8 1/4 x 6 1/2"). xv, 236 pp.Translated from the Norwegian by Edmund Gosse. Contemporary chocolate brown three-quarter morocco over marbled boards, raised bands, spine gilt in compartments with lily-of-the-valley sprig at center, volute cornerpieces, gilt titling, top edge gilt, other edges untrimmed. With frontispiece photogravure portrait of Ibsen, and two photo-mezzotype pictures of actresses Miss Robins and Miss Lea in their roles in the London production. Front pastedown with bookplate of Henry Horner; front free endpaper with small gift inscription in green ink, dated 1923. PMM 375 (Norwegian Edition). AN EXCELLENT COPY, with just a small, isolated dent to fore-edge of upper board and light browning to untrimmed edges; the contents extremely clean and fresh. This is a limited, Large Paper Copy of Ibsen's most famous play, very rare both institutionally and in commerce, with visually pleasing wide margins, tall proportions, and charming plates. "Hedda Gabler" tells the story of a strong-willed woman marooned in a marriage to a boring pedant, and the destructive results that follow when she refuses to accept society's role for her as the supportive wife. Britannica notes that this play "is remarkable for its nonjudgmental depiction of an immoral, destructive character, one of the most vividly realized women in dramatic literature." Although Norwegian playwright Henrik Ibsen (1828-1906) began his career in the Romantic vein, he became a pioneer of the realist style, and each later play concentrates on the troubled psyche of a protagonist caught between individualism and social pressure. It is not an overstatement to say that Ibsen revolutionized the theater; PMM notes that "[his] influence on the whole course of modern drama may be indicated by the inclusion of his plays in the repertoire of every avant-garde theatre of his day." Our American edition is surprisingly rare on the market, with no listed on ABPC or RBH in the last 50 years.

*The action takes place in a villa in Kristiania (now Oslo). Hedda Gabler, daughter of an aristocratic General, has just returned from her honeymoon with Jørgen Tesman, an aspiring young academic, reliable but not brilliant, who has combined research with their honeymoon. It becomes clear in the course of the play that she has never loved him but has married him for reasons pertaining to the boring nature of her life, and it is suggested that she may be pregnant...* ([Wikipedia][1]) [1]: http://en.wikipedia.org/wiki/Hedda_Gabler#Plot

gilt
The decorative application of gold or gold coloring to a portion of a book on the spine, edges of the text block, or an inlay in...[more]
raised band(s)
Raised bands refer to the ridges that protrude slightly from the spine on leather bound books.  The bands are created...[more]
morocco
Morocco is a style of leather book binding that is usually made with goatskin, as it is durable and easy to dye. (see also...[more]
bookplate
Highly sought after by some collectors, a book plate is an inscribed or decorative device that identifies the owner, or former...[more]
edges
The collective of the top, fore and bottom edges of the text block of the book, being that part of the edges of the pages of a...[more]
top edge gilt
Top edge gilt refers to the practice of applying gold or a gold-like finish to the top of the text block (the edges the...[more]
Marbled boards
...[more]