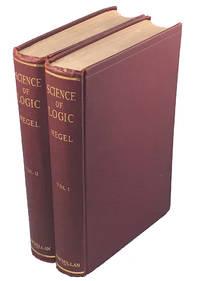 New York: The Macmillan Company, 1929. First English language edition. Hardcover. Near Fine. 2 vol. 8vo. [7], 8-404; [5], 8-486, [2] pp. Red publisher's cloth with gold lettering on the spine, lacks the dust jackets. A few leaves in volume two uncut. Translated by W.H. Johnston and L.G. Struthers. With an introductory preface by Viscount Haldane of Cloan. Weiss 303. The first English edition of Hegel's Science of Logic. Stanford Encyclopaedia of Philosophy, "Georg Willhelm Friedrich Hegel". The work is divided into three books, dealing with being, essence, and concept. According to the SEP, some readers of the work view it as a first-order ontological doctrine, a metaphysical work, while others view it as a work of Kantian transcendental logic, to be paired with Kant's list of non-empirical concepts, "the categories". (Stanford Encyclopaedia of Philosophy, Georg Willhelm Friedrich Hegel). Hegel is among the principal Continental philosophers, with his work influencing Richard Rorty, Jean-Paul Sartre, and several Marxist thinkers. Hegel himself exhibits Kantian and Spinozan influences in his writing, often being interpreted as a more religious philosopher than Kant was, and viewed as a historical rather than philosophical figure by the early Analytics, due to his reliance on Aristotelian logical principles in his work. A Near Fine set with a touch of wear to the fore-edge of volume two and to the corners of the boards.

All items subject to prior sale.� Certain items and shipping to certain countries may exceed the standard shipping amounts.� Any shipping expenses incurred above the standard rate will be billed at cost. Payment is in US dollars.� Personal checks must clear prior to shipment (please allow 10 days).� Books may be returned within 30 calendar days of delivery for any reason, so long as we are notified of return within 10 days of delivery.� Return items must be well packaged and fully insured and must be returned in same condition as sold. Any book described as a First Edition is also a First Printing unless otherwise indicated.

Seller rating:
This seller has earned a 5 of 5 Stars rating from Biblio customers.
Biblio.com member since: 2007
Madison, Wisconsin
Ask Seller a Question

Rare and Fine books in many fields.

Publisher's cloth
A hardcover book comprised of cloth over hard pasteboard boards. ...[more]
spine
The outer portion of a book which covers the actual binding. The spine usually faces outward when a book is placed on a shelf....[more]
leaves
Very generally, "leaves" refers to the pages of a book, as in the common phrase, "loose-leaf pages." A leaf is a single sheet...[more]
fine
A book in fine condition exhibits no flaws. A fine condition book closely approaches As New condition, but may lack the...[more]