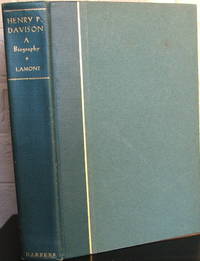 Henry P. Davison: The Record of a Useful Life

Henry P. Davison: The Record of a Useful Life

NY: Harper & Brothers, 1933. Signed first edition. Hard cover in original cloth. Published NY: Harper & Brothers, 1933, first printing. Presentation to American journalist and historian Mark Sullivan (1874 - 1952), author of the six volume "Our Times". "For Mark Sullivan from Thomas W. Lamont, June 1933." Mark Sullivan was a titan of twentieth century journalism. Born on a farm in Chester County, Pennsylvania, in 1874, he was only in his late teens when he bought an interest in a local newspaper, the Phoenixville Republican, for $300. The profits from this investment funded his education at Harvard, where he earned bachelor's and law degrees. In the first decade of the century he was a muckraker in the mold of Ida Tarbell and Lincoln Steffens. His 1904 exposé on patent medicine quacks for Ladies' Home Journal helped stoke the public outrage that resulted in the passage of the Pure Food and Drug Act two years later. He was a close friend of Herbert Hoover and shared similar conservatism. In his later years, he railed against the New Deal and American engagement overseas. He died in 1952, in the same farmhouse he was born in. Thomas W. Lamont served as acting head of J.P. Morgan & Co. and later as chairman of its board of directors. Banker Henry P. Davison was involved in the founding of Bankers Trust Company and became a senior partner at J.P. Morgan. He, Lamont and Morgan were members of the secretive Jekyll Island Club, where plans for a central bank were formulated in 1910. With the entry of the United States in World War I in 1917, Davison was named Chairman of the War Council of the American Red Cross. 8vo., 6 3/4" x 9 1/2", xxii+373pp., illustrated with frontis portrait and b/w plates. Green cloth with gilt titles and decorations and green paper over boards, top edge gilting. Minor spotting to the cloth, name in small letters on pastedown, else near fine, pages clean and bright, binding tight, unworn. . Signed by Author. 1st. Hard. Near Fine/No Jacket. 8vo.

Seller rating:
This seller has earned a 5 of 5 Stars rating from Biblio customers.
Biblio.com member since 2005
Granville, New York
Ask Seller a Question

About The Wild Muse

First Edition
In book collecting, the first edition is the earliest published form of a book. A book may have more than one first edition in... [More]
New
A new book is a book previously not circulated to a buyer. Although a new book is typically free of any faults or defects,... [More]
Cloth
"Cloth-bound" generally refers to a hardcover book with cloth covering the outside of the book covers. The cloth is stretched... [More]
fine
A book in fine condition exhibits no flaws. A fine condition book closely approaches As New condition, but may lack the... [More]
gilt
The decorative application of gold or gold coloring to a portion of a book on the spine, edges of the text block, or an inlay in... [More]
jacket
Sometimes used as another term for dust jacket, a protective and often decorative wrapper, usually made of paper which wraps... [More]
tight
Used to mean that the binding of a book has not been overly loosened by frequent use.