Home Books of the World The Hero's Walk 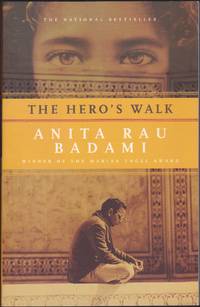 Born in the eastern town of Rourkela, Badami spent her childhood drifting around India as her father, a mechanical engineer and train designer, was transferred frequently. Her family moved at least eight times before she was twenty. Since her parents both spoke different Indian dialects, English was the bridging language for the family. (Badami's second language is Hindi.) The convent nuns who took care of her schooling were not always a receptive audience for Badami's budding literary talents. "Dear child," one of her teachers commented in response to a writing assignment, "what big lies you tell. Please ask your mother to see me." At school the nuns taught Greek and Roman myths, and even Celtic tales. "The only mythology I don't remember learning in school was Hindu mythology," Anita recalls. At home, however, Badami was immersed in the cultures and myths of her family and the multilingual railway workers. This mélange of myths informed Badami's formidable storytelling ability and shaped the exploration of heroism that runs throughout her latest novel. In 1991 Anita Rau Badami left Bangalore in southern India to join her husband in Calgary, where he went to pursue his Masters in Environmental Science and then to Vancouver for a PhD in Planning. Arriving with their four-year-old son and five hundred dollars, the family was soon ensconced in a depressing basement apartment. To earn money, the former journalist, ad copywriter and children's writer ended up selling china in a mall. Of this time, Badami says, "I learned an awful lot about figurines and place settings, but I also made the most wonderful friends." Badami began taking creative writing courses and wound up with Tamarind Mem, her master's thesis project at the University of Calgary. She sent the manuscript to Penguin Canada and quickly found herself a bestselling author with a reputation as a talented new Canadian writer. Her stories of home and away, of here and there, made her a part of the tradition Badami refers to as the post-postcolonial-immigrant school that began with Salman Rushdie's Midnight's Children . "I don't think I could have written a novel if I had not left India," Badami said in an interview with The Globe and Mail . "I find that the distance gives me perspective and passion. I was twenty-nine years in India and ten years here, so I have a foot in India and a couple of toes here. I am both doomed and blessed, to be suspended between two worlds, always looking back, but with two gorgeous places to inhabit, in my imagination or my heart." Just after the publication of The Hero's Walk , Anita Rau Badami won the prestigious Marian Engel Award, given to a Canadian woman author in mid-career for outstanding prose writing. (Previous recipients include Carol Shields, Jane Urquhart, Bonnie Burnard and Barbara Gowdy.) Most recently, The Hero's Walk was optioned for film by a Canadian producer of See Spot Run Films in Los Angeles.

30 day return guarantee, with full refund if an item arrives mis-described or damaged.

Seller rating:
This seller has earned a 5 of 5 Stars rating from Biblio customers.
Biblio.com member since 2017
Arlington, Virginia
Ask Seller a Question

Finding new homes for the library I collected over five decades of travel around the world.

New
A new book is a book previously not circulated to a buyer. Although a new book is typically free of any faults or defects, "new"... [More]
trade paperback
Used to indicate any paperback book that is larger than a mass-market paperback and is often more similar in size to a hardcover... [More]
fine
A book in fine condition exhibits no flaws. A fine condition book closely approaches As New condition, but may lack the... [More]
remainder mark
Usually an ink marking of some sort which indicates that the book was designated a remainder. In most cases, it can be found on... [More]