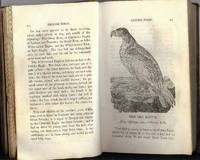 First edition, second issue as shown by the presence of the words "Wycliffe, 1791" from the figure of the sea eagle on p. 11 of Volume I. Mottled calf over paper boards with some damage to the leather on volume
one and volume two. Occasional spotting but otherwise a nice clean and internally bright copy. This is a very rare set, owing in part to the signature and ascension of the Oates family. Published in two parts, the first deals with land birds, the second with water birds. "The text of the first volume was entirely written by Ralph Beilby; the illustrations are all by Bewick. It is as illustrator and artist that Bewick is best known, and mainly on account of his excellent woodcuts this work passed through numerous editions, a supplement being published by him in 1821. He also issued a number of small atlases of cuts without descriptive matter. The text in all the treatises bearing his name is mostly compilations from earlier writers." Thomas Bewick, 1753-1828, is best remembered for his wood engravings, especially those in his two works of Natural History: A General History of Quadrupeds, and A History of British Birds, Vol. I, Land Birds, Vol. II, Water Birds. The methods of printing used in the eighteenth century led Bewick to develop techniques of engraving that far surpassed the work of his contemporaries. He lowered the surface of the blocks in the areas which he 'wished to appear pale, so as to give the effect of distance'. These techniques, together with Bewick's complete mastery of the traditional methods, and his artistic ability, resulted in some exquisite engravings. Masterful engraving indeed, but all too frequently the printers of the day had neither the opportunity, time, or the incentive, to produce fine, sensitive impressions. Today, printing the engravings individually and using a combination of eighteenth and nineteenth century techniques, and twentieth century materials, I was able to produce impressions that I hope go some way towards revealing the full potential of the blocks. As always it was both a privilege and a pleasure to print these wood engravings. Bewick was born in the north of England at Cherryburn, on the south bank of the river Tyne, twelve miles west of Newcastle upon Tyne. At the age of fourteen he was apprenticed to Ralph Beilby, a general engraver in Newcastle. Ten years later he formed a partnership with Beilby. Wood engraving was only a small part of the business and the majority of the work involved engraving inscriptions and decorations on a wide variety of objects such as guns, dog collars, harness, clock faces, rings, cutlery and the engraving of banknotes, billheads and even bookbinders' tools and letters.

Bewick is best known for his wood engravings in his two works of natural history: A General History of Quadrupeds and A History of British Birds, Vol.1 Land Birds, Vol. 2 Water Birds. Bewick started to engrave
the illustrations for the Quadrupeds in 1785, and in his autobiographical Memoir 1 recounts: 'The greater part of these Wood cuts were drawn & engraved at nights, after the days work of the shop was over. The
book was very well received, and Bewick was encouraged to work on a history of birds. © David Esslemont 1997. These books were purchased at a Dominic Winter Auction and further family provenance is as follows from a Oates historian. "Joseph Oates, whose name is inscribed in the volume, was the great-grandfather of Captain Oates. He was born in 1743 and died in 1824. His wife was Elizabeth Rayner, which accounts for the other signature in the book. Joseph Oates and Elizabeth Rayner had six children and the youngest, Edward (1792-1865) married Susan Grace in 1836. One of their five children was William Oates (1841-1896), the father of Captain Oates. His grandparents' names were included in the full name of Captain Oates - i.e. Lawrence Edward Grace Oates. There is a strong connection with travel and exploration throughout the Oates ancestors." There is no connection to be found that these books were taken on the expedition or recovered from the expedition, if they were, they would be worth considerably more than our price. It is safe, however to say that it was a treasured set by grandparents and parents of Oates and that both the great grandfather and father had interest in birds and collected such upon their travels around the world. From the age of 20 until his death at 32, Oates was mostly away in service or in the Antarctic. He spent 9 months at his ancestral home recovering from a leg wound he received in the Boer War in 1901.

calf
Calf or calf hide is a common form of leather binding.  Calf binding is naturally a light brown but there are ways to treat...[more]
inscribed
When a book is described as being inscribed, it indicates that a short note written by the author or a previous owner has...[more]
A.N.
The book is pristine and free of any defects, in the same condition as ...[more]
fine
A book in fine condition exhibits no flaws. A fine condition book closely approaches As New condition, but may lack the...[more]
spine
The outer portion of a book which covers the actual binding. The spine usually faces outward when a book is placed on a shelf....[more]