Home Between the Covers- Rare Books, Inc. ABAA History of the United States, or Republic of America: Exhibited in Connexion with its Chronology and Progressive… 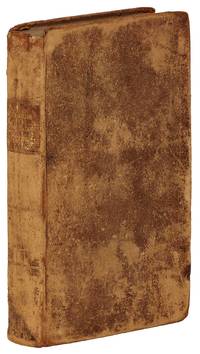 History of the United States, or Republic of America: Exhibited in Connexion with its Chronology and Progressive Geography by Means of a Series of Maps... Designed for Schools and Private Libraries

History of the United States, or Republic of America: Exhibited in Connexion with its Chronology and Progressive Geography by Means of a Series of Maps... Designed for Schools and Private Libraries

New-York: White, Gallaher, & White, 1829. Hardcover. Very Good. Second edition, revised and corrected. Tall octavo. 424, xliv pp. Publisher's legal sheep with morocco spine label gilt. Wear at the crown and extremities, some modest foxing in the text, but a tight and sound, pleasing very good copy. Inscribed by Emma Willard: "To Mr. Alexander from his friend The Author," followed by a contemporary re-gifting inscription: "Asa G. Alexander from his affect'e Uncle, Fr. Alexander. Oct. 11th, 1831" (our research indicates Asa G. Alexander of Killingly, Connecticut was either attending or was soon to attend Yale at the time of the inscription from his uncle, i.e. he is listed in the 1832 catalog of students; further evidence indicates he later became a teacher). Also contains an attractive later bookplate and pencil ownership signature, all neat and not distracting from the author's inscription. Emma Willard was an educational reformer who opened the Troy Female Seminary in 1814 which was the first school in the United States to offer higher education to women, and which survives to this day as the Emma Willard School. The school has graduated a great number of distinguished women including Elizabeth Cady Stanton, Lily Spencer-Churchill (Duchess of Marlborough), Jane Fonda, and Senator Kirsten Gillibrand of New York. Willard also wrote several textbooks and books on history and geography, most notably this title, *History of the United States, or Republic of America*, (1828). She was a strong advocate of science education for women. An early work by a woman that helped pave the way for higher education for American women. According to Margaret Rossiter: "'Willard, her school, and others like it provided the essential starting point for women in science and the professions" (M.B. Ogilvie, *Women in Science* pp. 19-20). Reprinted over several decades, this early edition is particularly scarce, and the earliest Inscribed book by Willard we've seen.

G
Good describes the average used and worn book that has all pages or leaves present. Any defects must be noted. (as defined...[more]
spine label
The paper or leather descriptive tag attached to the spine of the book, most commonly providing the title and author of the...[more]
octavo
Another of the terms referring to page or book size, octavo refers to a standard printer's sheet folded four times, producing...[more]
inscribed
When a book is described as being inscribed, it indicates that a short note written by the author or a previous owner has...[more]
New
A new book is a book previously not circulated to a buyer. Although a new book is typically free of any faults or defects,...[more]
bookplate
Highly sought after by some collectors, a book plate is an inscribed or decorative device that identifies the owner, or former...[more]
gilt
The decorative application of gold or gold coloring to a portion of a book on the spine, edges of the text block, or an inlay in...[more]
morocco
Morocco is a style of leather book binding that is usually made with goatskin, as it is durable and easy to dye. (see also...[more]
tight
Used to mean that the binding of a book has not been overly loosened by frequent use.