Home SequiturBooks The History Of The World. In Five Bookes 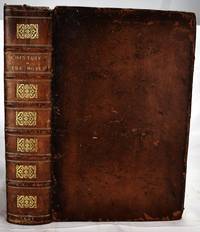 The History Of The World. In Five Bookes

The History Of The World. In Five Bookes

London : Printed by William Iaggard [, William Stansby, and Nicholas Okes] for Walter Burre, and are to be sold at his shop in Paules Church-yard at the signe of the Crane, 1621. 3rd. Hardcover. Good. Folio, 33 x 22 cm. 3rd ed. Printed by William Jaggard for Walter Burre, 1621. Bound in full contemporary calf. 7 spine compartments. Gilt ruled. Some rubbing / minor wear to cover. Solid binding. Engraved portrait of Raleigh on title. Collated: [66], 184, 181-555, [1], 510, 515-669, [55] pages, [5] plates: genealogical tables (woodcuts), maps. Minor worming through first 60 pages. Some damp staining to upper margin of pages affecting some text. Armorial book plate of William Durning Hole. <br> Raleigh wrote, "The History of the World" while imprisoned by James I in the tower of London. It was initially intended to serve as an educational tool for Henry, Prince of Wales. Henry died in 1612, forcing Raleigh to bring the project to conclusion. Raleigh was only able to complete the first volume, from the beginning of history to 130 B.C. (the rise of Rome). The Historie covers the rise and fall of the three great empires of Babylon, Assyria and Macedon, and deals with the most flourishing periods of Jewish, Greek and Roman history. However, the work was cynical and held monarchs throughout history in contempt, leading copies being seized and the publication banned under authority of James I. "The success of Raleigh's History can perhaps be explained by the very fact that it is not a work of history in the academic sense but a political tract of immediate applicability. Its author embodied all the glories of the reign of Elizabeth I, which at the time of publication had already begun to be transfigured into a golden age, Raleigh can be taken as the epitome of the Elizabethan idea of courtier and politician, sailor and explorer, writer and poet. (PMM 117). <br> Contents: 1. Intreating of the Beginning and first Ages of the same from the Creation unto Abraham. 2. Of the Times from the Birth of Abraham, to the destruction of the Temple of Salomon. 3. From the destruction of Jerusalem, to the time of Philip of Macedon. 4. From the Reigne of Philip. to the establishing of that Kingdome, in the Race of Antigonus. 5. From the settled rule of Alexanders successors in the East, untill the Romans. made Conquest of Asia and Macedon. <br> STC 20639

Customers may return ordered books for any reason within 14 days of receipt. We will pay the return shipping costs if the return is a result of our error. Shipping fees and handling fees may be charged to the customer if the return is the result of customer error. Open box charges may be applied for new books that are opened by customers (i.e. the shrink wrap is removed or there is obvious signs of wear.)

Seller rating:
This seller has earned a 5 of 5 Stars rating from Biblio customers.
Biblio.com member since 2008
Boonsboro, Maryland
Ask Seller a Question

Sequitur Books is an independent academic bookstore. We pride ourselves on a thought provoking selection, with extensive collections in philosophy, history, social science, African studies, Near Eastern studies, and physical science. Our motto, "For every person, a good book!"

folio
A folio usually indicates a large book size of 15" in height or larger when used in the context of a book description. Further,... [More]
plate
Full page illustration or photograph. Plates are printed separately from the text of the book, and bound in at production. I.e.,... [More]
spine
The outer portion of a book which covers the actual binding. The spine usually faces outward when a book is placed on a shelf.... [More]
calf
Calf or calf hide is a common form of leather binding. Calf binding is naturally a light brown but there are ways to treat the... [More]
rubbing
Abrasion or wear to the surface. Usually used in reference to a book's boards or dust-jacket.
gilt
The decorative application of gold or gold coloring to a portion of a book on the spine, edges of the text block, or an inlay in... [More]