Home The Bookman & The Lady The Hitchhiker's Guide to the Galaxy 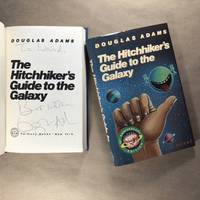 The Hitchhiker's Guide to the Galaxy

The Hitchhiker's Guide to the Galaxy

" IRRESISTIBLE! " -- The Boston Globe: Seconds before the Earth is demolished to make way for a galactic freeway, Arthur Dent is plucked off the planet by his friend Ford Prefect, a researcher for the revised edition of The Hitchhiker's Guide to the Galaxy who, for the last fifteen years, has been posing as an out-of-work actor.Together this dynamic pair begin a journey through space aided by quotes from The Hitchhiker's Guide ("A towel is about the most massively useful thing an interstellar hitchhiker can have") and a galaxy-full of fellow travelers: Zaphod Beeblebrox--the two-headed, three-armed ex-hippie and totally out-to-lunch president of the galaxy; Trillian, Zaphod's girlfriend (formally Tricia McMillan), whom Arthur tried to pick up at a cocktail party once upon a time zone; Marvin, a paranoid, brilliant, and chronically depressed robot; Veet Voojagig, a former graduate student who is obsessed with the disappearance of all the ballpoint pens he bought over the years. Where are these pens? Why are we born? Why do we die? Why do we spend so much time between wearing digital watches? For all the answers stick your thumb to the stars. And don't forget to bring a towel!"[A] WHIMSICAL ODYSSEY...Characters frolic through the galaxy with infectious joy."--Publishers WeeklyFrom the Paperback edition. - The Hitchhiker's Guide to the Galaxy aired for the first time at 10:30pm on Wednesday, 8th March 1978 on the BBC as a radio comedy. The radio show's popularity spawned books, a televisions series, several stage plays, a computer game and feature films. The novel adaptation of Adam's radio series is a misnamed “Trilogy” of six books, five written by Douglas Adams – that sold more than 15 millions copies in his lifetime - and a sixth by Eoin Colfer. At the release of the fourth book the series was named "trilogy in four parts," and the US edition of the fifth book was originally released with the legend "The fifth book in the increasingly inaccurately named Hitchhiker's Trilogy" on the cover. Subsequent re-releases of the other novels bore the legend "The [first, second, third, fourth] book in the increasingly inaccurately named Hitchhiker's Trilogy". In addition, the blurb on the fifth book describes it as "the book that gives a whole new meaning to the word 'trilogy'" Before his death from a heart attack on May 11, 2001, Adams was considering writing a sixth novel in the Hitchhiker's series. Eoin Colfer, an Irish writer of Children's Books, most famous for his Artemis Fowl series, wrote the sixth book in the Hitchhiker's series in 2008–09. Books in the Series (Trilogy) are as follows: The Hitchhiker's Guide to the Galaxy The Restaurant at the End of the Universe Life, the Universe and Everything So Long, and Thanks for All the Fish Mostly Harmless And Another Thing... Two omnibus editions were created by Douglas Adams to combine the Hitchhiker series novels and to "set the record straight". The stories came in so many different formats that Adams stated that every time he told it he would contradict himself. Therefore, he stated in the introduction of The More Than Complete Hitchhiker's Guide that "anything I put down wrong here is, as far as I'm concerned, wrong for good." The two omnibus editions were The More Than Complete Hitchhiker's Guide, Complete and Unabridged (published in 1987) and The Ultimate Hitchhiker's Guide, Complete and Unabridged (published in 1997). Inspired in part by Ken Walsh's Hitch-hiker's Guide to Europe published in 1971, which stresses the importance of towels to the travelling hitch-hiker, an important article to the Hitchhiker's in Adam's galaxy as well. When Elon Musk's Tesla Roadster was launched into space on the maiden flight of the Falcon Heavy rocket in February 2018, it had the words DON'T PANIC on the dashboard display and carried amongst other items a copy of the Hitchhiker's Guide to the Galaxy and a towel.

Read More: Identifying first editions of The Hitchhiker's Guide to the Galaxy

bookseller
The Bookman & The Lady

About The Bookman & The Lady

We are an independant seller that specializes in Rare and Used Books. We have signed books and 1st editions. Rare and out of print titles. Along with general fiction and non-fiction items. Feel free to contact us with any specific questions. Thanks for looking at our books.

fine
A book in fine condition exhibits no flaws. A fine condition book closely approaches As New condition, but may lack the... [More]
jacket
Sometimes used as another term for dust jacket, a protective and often decorative wrapper, usually made of paper which wraps... [More]
inscribed
When a book is described as being inscribed, it indicates that a short note written by the author or a previous owner has... [More]
title page
A page at the front of a book which may contain the title of the book, any subtitles, the authors, contributors, editors, the... [More]