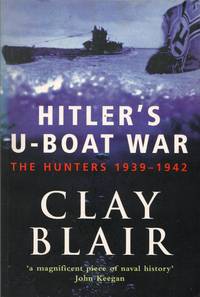 London, England: Cassell & Co Ltd., 2001. 810 Pages with Black/White Photos. Hitler's U-boat War is an epic sea story about the most arduous and prolonged naval battle in history. For a period of nearly six years, the German U-boat force attempted to blockade and isolate the British Isles in hopes of forcing the British out of the war, thereby thwarting both the Allied strategic air assault on German cities and Operation Overlord, the Allied invasion of Occupied France. Fortunately for the Allies, the U-boat force failed to achieve either of these objectives, but in the attempt they sank 2,800 Allied merchant ships, while the Allies sank nearly 800 U-boats. On both sides, tens of thousands of sailors perished. For decades, an authoritative and definitive history of the Battle of the Atlantic could not be attempted, since London and Washington agreed to withhold all official code-breaking and U-boat records in order to safeguard the secrets of code breaking in the postwar years. The accounts that did appear were incomplete and full of false conclusions and errors of fact, often leaving the entirely wrong impression that the German U-boats came within a whisker of defeating the Allies, a myth that is finally laid to rest in this account. Clay Blair, acclaimed author of the bestselling naval classic Silent Victory: The U.S. Submarine War Against Japan, has drawn from the official records as well as the work of German, British, American, and Canadian naval scholars. Never before has Hitler's U-boat war been chronicled with such authority, fidelity, objectivity, and detail. The result is this magnificent and monumental work, crammed with vivid and dramatic scenes of naval actions and dispassionate but startling new revelations, interpretations, and conclusions about all aspects of the Battle of the Atlantic. . Reprint. Soft Cover. Good/No Jacket.

Clay Blair is the author of two dozen books that have created a permanent place in the telling of our history. These include Silent Victory: The U.S. Submarine War Against Japan; biographies of Admiral H. G. Rickover; Generals Douglas MacArthur, Matthew B. Ridgway, and Omar N. Bradley; and John F. Kennedy; and, most recently, The Forgotten War, about Korea. He died in 1998.

Seller rating:
This seller has earned a 5 of 5 Stars rating from Biblio customers.
Biblio.com member since: 2008
Melbourne, Victoria
Ask Seller a Question

reprint
Any printing of a book which follows the original edition. By definition, a reprint is not a first edition.
jacket
Sometimes used as another term for dust jacket, a protective and often decorative wrapper, usually made of paper which wraps...[more]
New
A new book is a book previously not circulated to a buyer. Although a new book is typically free of any faults or defects,...[more]