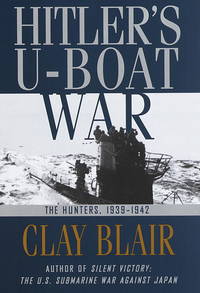 New York: Random House, 1996. First Edition [stated] May be Book Club as no price on DJ. Hardcover. Very good/Very good. xviii, [14], 809. [5] pages. List of Maps. List of Plates. Acknowledgements and Sources. Bibliography, Maps, Appendices. Index. Clay Blair Jr. (May 1, 1925 - December 16, 1998) was an American journalist and author, best known for his books on military history. He served on the fleet submarine Guardfish (SS-217) in World War II and later wrote for Time and Life magazines before becoming editor-in-chief of The Saturday Evening Post. He assisted General Omar Bradley in the writing of his autobiography, A General's Life, published after the general's death. Blair wrote two dozen history books and hundreds of magazine articles that reached a popular audience. His last book was Hitler's U-Boat War: The Hunted, 1942-1945, which followed Hitler's U-Boat War: The Hunters, 1939-1942. Blair's history of the Korean War The Forgotten War: America in Korea, 1950-1953 is considered one of the definitive historical works on the war. Hitler's U-boat War is an epic sea story about the most arduous and prolonged naval battle in history. The U-boat force sank 2,800 Allied merchant ships, while the Allies sank nearly 800 U-boats. On both sides, tens of thousands of sailors perished. For decades, an authoritative and definitive history of the Battle of the Atlantic could not be attempted, since London and Washington agreed to withhold all official code-breaking and U-boat records in order to safeguard the secrets of code breaking in the postwar years. Clay Blair, acclaimed author of the bestselling naval classic Silent Victory: The U.S. Submarine War Against Japan, has drawn from the official records as well as the work of German, British, American, and Canadian naval scholars. Never before has Hitler's U-boat war been chronicled with such authority, fidelity, objectivity, and detail. The result is this magnificent and monumental work, crammed with vivid and dramatic scenes of naval actions and dispassionate but startling new revelations, interpretations, and conclusions about all aspects of the Battle of the Atlantic.

Clay Blair is the author of two dozen books that have created a permanent place in the telling of our history. These include Silent Victory: The U.S. Submarine War Against Japan; biographies of Admiral H. G. Rickover; Generals Douglas MacArthur, Matthew B. Ridgway, and Omar N. Bradley; and John F. Kennedy; and, most recently, The Forgotten War, about Korea. He died in 1998.

Books are offered subject to prior sale. Satisfaction guaranteed. If you notify us within 7 days that you are not satisfied with your purchase, we will refund your purchase price when you return the item in the condition in which it was sold.

Seller rating:
This seller has earned a 5 of 5 Stars rating from Biblio customers.
Biblio.com member since: 2005
Silver Spring, Maryland
Ask Seller a Question