Home Bluebird Books A Hologram for the King 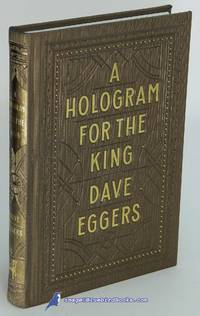 A Hologram for the King

A Hologram for the King

San Francisco: McSweeney's Books. Near Fine with no dust jacket. 2012. First Edition. Hardcover. 9781936365746 . A stated first printing of the fourth novel by Dave Eggers. In this highly-readable work, the protagonist travels the world in order to earn money that he desperately needs. --- In ornate olive and gold cloth-covered boards with dark blue endpapers. Lacks a dust jacket (likely as issued) but retains its removable original rear panel publisher's sticker. --- An about Near Fine copy: clean, bright and unmarked.; Octavo (8 to 9 in. tall); 312 pages .

Dave Eggers is the author of six previous books, including Zeitoun , winner of the American Book Award and the Dayton Literary Peace Prize. What Is the What was a finalist for the 2006 National Book Critics Circle Award and won France’s Prix Medici . That book, about Valentino Achak Deng, a survivor of the civil war in Sudan, gave birth to the Valentino Achak Deng Foundation, which operates a secondary school in South Sudan run by Mr. Deng. Eggers is the founder and editor of McSweeney’s, an independent publishing house based in San Francisco that produces a quarterly journal, a monthly magazine, The Believer , and an oral history series, Voice of Witness. In 2002, with Nínive Calegari he co-founded 826 Valencia, a nonprofit writing and tutoring center for youth in the Mission District of San Francisco. Local communities have since opened sister 826 centers in Chicago, Los Angeles, New York, Ann Arbor, Seattle, Boston and Washington, DC, and similar centers now exist in London (the Ministry of Stories), Dublin (Fighting Words) and in Copenhagen, Stockholm, Melbourne, and many other cities. A native of Chicago, Eggers now lives in Northern California with his wife and two children.

All sales sold on a satisfaction guaranteed basis--all we ask is that you notify us within 30 days of purchase that you would like to return an item.

Seller rating:
This seller has earned a 5 of 5 Stars rating from Biblio customers.
Biblio.com member since 2005
Littleton, Colorado
Ask Seller a Question

Bluebird Books is the bookselling business of Eric Mayer, operating from my base in Littleton, Colorado. I specialize in classic fiction and literature, books on birds and natural history, railroadiana, biography, history and many other genres. Bluebird Books features publications by the Modern Library and Everyman's Library. I offer free shipping on books shipped within the US via USPS Media Mail. INTERNATIONAL ORDERS: I recommend that you use Biblio.com for your international orders because they have formed a partnership with Asendia to allow for much more affordable shipping on parcels weighing under 5 lb. (about 2.26 kg).

First Edition
In book collecting, the first edition is the earliest published form of a book. A book may have more than one first edition in... [More]
fine
A book in fine condition exhibits no flaws. A fine condition book closely approaches As New condition, but may lack the... [More]
jacket
Sometimes used as another term for dust jacket, a protective and often decorative wrapper, usually made of paper which wraps... [More]
octavo
Another of the terms referring to page or book size, octavo refers to a standard printer's sheet folded four times, producing... [More]