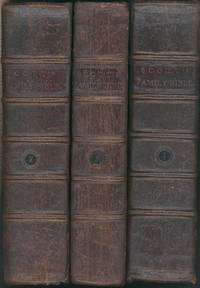 The Holy Bible containing the Old and New Testaments, with original notes, and practical observations, and copious marginal references.

The Holy Bible containing the Old and New Testaments, with original notes, and practical observations, and copious marginal references.

All items subject to prior sale. Returns accepted in same condition within 10 business days for any reason. PAYMENT: Cash with order. International orders require payment in U.S. funds drawn on a U.S. Bank or through an International Money Order. Libraries and institutions may defer billing upon our receipt of purchase order. Books graded conservatively with prominent defects mentioned.

Seller rating:
This seller has earned a 5 of 5 Stars rating from Biblio customers.
Biblio.com member since: 2005
Stockbridge, Georgia
Ask Seller a Question

spine
The outer portion of a book which covers the actual binding. The spine usually faces outward when a book is placed on a shelf....[more]
quarto
The term quarto is used to describe a page or book size. A printed sheet is made with four pages of text on each side, and the...[more]
calf
Calf or calf hide is a common form of leather binding.  Calf binding is naturally a light brown but there are ways to treat...[more]
title page
A page at the front of a book which may contain the title of the book, any subtitles, the authors, contributors, editors, the...[more]
raised band(s)
Raised bands refer to the ridges that protrude slightly from the spine on leather bound books.  The bands are created...[more]
acceptable
A non-traditional book condition description that generally refers to a book in Good or Very Good condition, although no...[more]
New
A new book is a book previously not circulated to a buyer. Although a new book is typically free of any faults or defects,...[more]
tight
Used to mean that the binding of a book has not been overly loosened by frequent use.
VG
Very Good condition can describe a used book that does show some small signs of wear - but no tears - on either binding or...[more]