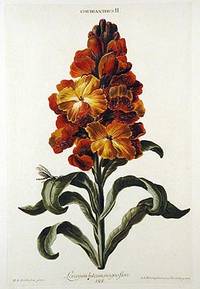 Nuremberg: Fleischmann, and Adam Ludwig Wirsing, [plates dated 1753-1786]. Folio (18 x 13 inches). 172 fine hand-colored engraved plates by J.M. Seligman, J.M. Stock and A.L. Wirsing after G.D. Ehret, G.W. Baurenfeind, B.R. and M.B. Dietschin, N.F. Eisenberger, J.C. Keller and others (plates 60 and 61, and 121 and 122 counted as one plate each, bound without plates 90, 126, 131, 135, 179 and 180, first two plates with slight vertical crease, plate 97 with small tear at fold not affecting the image). Bound without text. Contemporary mottled calf (joints cracked, extremities scuffed). "ONE OF FINEST RECORDS OF THE CULTIVATED FLOWERS OF THE PERIOD" (Dunthorne). First edition, bound, as often found, without text, which was not published simultaneously with the plates. Described by Blunt as "one of the most decorative florilegia of the mid-eighteenth century" with more than forty of the plates based on drawings by Trew's famous protégé Georg Ehret with whom he had collaborated on "Plantae Selectae". The spectacular plates are "full sized colored figures of Hyacinths, Tulips (over 20 plates), Ranunculi, Anemones, Caryophylli, Lilies, Auriculas, Roses, Narcissi, Iris, Cheiranthi, Asters, Fritilleries, Crown Imperials" (Dunthorne), and are some of the most sought after and important botanical prints in the world. It is no wonder that he became one of the foremost illustrators of botanical images of his time, at a time when it can be said that art of this nature was highly prized and passionately collected. Like his father before him Ehret trained as a gardener, initially working on estates of German nobility, and painting flowers only occasionally, another skill taught him by his father, who was a good draughtsman. Ehret’s “first major sale of flower paintings came through Dr Christoph Joseph Trew, eminent physician and botanist of Nuremberg, who recognized his exceptional talent and became both patron and lifelong friend. Ehret sent him large batches of watercolours on the fine-quality paper Trew provided. In 1733 Trew taught Ehret the botanical importance of floral sexual organs and advised that he should show them in detail in his paintings. Many Ehret watercolours were engraved in Trew's works, such as ‘Hortus Nitidissimus’ [as here] (1750–86) and ‘Plantae selecta’e (1750–73), in part two of which (1751) Trew named the genus Ehretia after him. “During 1734 Ehret travelled in Switzerland and France, working as a gardener and selling his paintings. While at the Jardin des Plantes, Paris, he learned to use body-colour on vellum, thereafter his preferred medium. In 1735 he travelled to England with letters of introduction to patrons including Sir Hans Sloane and Philip Miller, curator of the Chelsea Physic Garden. In the spring of 1736 Ehret spent three months in the Netherlands. At the garden of rare plants of George Clifford, banker and director of the Dutch East India Company, he met the great Swedish naturalist, Carl Linnaeus, who was then formulating his new classification based on plant sexual organs. Ehret painted a Tabella (1736), illustrating the system, and sold engravings of it to botanists in Holland. Some of his paintings of the exotics were engraved in Linnaeus's “Hortus Cliffortianus” (1737). “[Ehret] signed and dated his work, naming the subject in pre-Linnaean terms. He published a florilegium, “Plantae et papiliones rariores” (1748–62), with eighteen hand-coloured plates, drawn and engraved by himself... Ehret also provided plant illustrations for several travel books. His distinctive style greatly influenced his successors” (Enid Slatter for DNB). The number of plates bibliographers have associated with this work differs considerably: Brunet V:943 (calls for 190 plates); Dunthorne 310 (180 plates, actually 178); Great Flower Books p. 78 (180 plates, plates 60/61 and 121/122 are represented by one plate each); Johnston "Cleveland Collections" 493 (190 plates); Nissen BBI 1995 (180 plates, 60/61 and 121/122 each on one plate, referance to Tjaden with 190 plates); Pritzel 9500 (180 plates); Stafleu and Cowan TL2 15.130 (180 plates, with reference to Tjaden with 190 plates). Catalogued by Kate Hunter.

All items may be returned within 30 days of the sale.

calf
Calf or calf hide is a common form of leather binding.  Calf binding is naturally a light brown but there are ways to treat...[more]
folio
A folio usually indicates a large book size of 15" in height or larger when used in the context of a book description....[more]
New
A new book is a book previously not circulated to a buyer. Although a new book is typically free of any faults or defects,...[more]
vellum
Vellum is a sheet of specialty prepared skin of lamb, calf, or goat kid used for binding a book or for printing and writing. ...[more]
First Edition
In book collecting, the first edition is the earliest published form of a book. A book may have more than one first edition in...[more]
plate
Full page illustration or photograph. Plates are printed separately from the text of the book, and bound in at production. I.e.,...[more]
G
Good describes the average used and worn book that has all pages or leaves present. Any defects must be noted. (as defined...[more]
cracked
In reference to a hinge or a book's binding, means that the glue which holds the opposing leaves has allowed them to separate,...[more]
fine
A book in fine condition exhibits no flaws. A fine condition book closely approaches As New condition, but may lack the...[more]