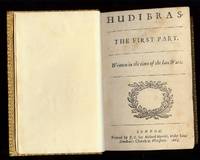 Butler, Samuel. "Hudibras. The First Part. Written in the time of the late Wars". [4], 268 pages. First Authorized Edition, first issue, with "Saint" in imprint spelled out in full; errata is present, lacking the imprimatur leaf (dated Nov. 11, 1662), and all textual errors uncorrected. London: Printed by J.G. for Richard Marriot, 1663. [bound with] "Hudibras. The Second Part. By the Author of the First". [4], 216 pages. Also, third part dated 1678. Bound in exceptionally fine binding and in very good condition with the bookplates of Daniel Henry Holmes, an avid book collector. This edition certainly is one of the rarest being that it is a first issue. A pirate copy came out the year before in 1662 and all proceeds from the sale of the book by the thief were recovered by Butler. Collation is as follows: [2 blank], TP, A3-8, B8-I8, K-R8, 2nd TP, B-I8, K-O8, P4, 3rd TP, A-I8, K-R8, S7, [2 Blank].

Hudibras by Samuel Butler is a critique of the English Civil War and pokes at the Puritans and their military zeal to spread the word of God with Bible and Pike. This attractive printing and wonderfully bound copy of Butler's mock epic in octosyllabic couplets, its three parts first published in 1663, 1664 and 1678. Modeled after Don Quixote, the work satirizes the hypocrisy and self-seeking of the Presbyterians and independents represented by the title character, Hudibras and his servant Ralpho, demonstrating the pairs, greed, stupidity, cowardice and duplicity. Butler, a Colonel in the Cromwellian army is involved in any number of various comic misadventures and Butler is squarely pointing at Oliver Cromwell and his lot as Butler was and remained a confirmed Royalist and Anglican (King Henry VIII's Anglican Church).

This mock epic became the rage of its time and was followed by nearly 27 editions that included, later engraved illustrations to highlight the comedic adventures of the two. In the end of this volume are also
found the Letter from the Knight to his Lady and a corresponding letter from the Lady to the Knight.

fine binding
An elaborate and decorative binding, example including a leather-bound book with gilt edges, raised blind...[more]
errata
Errata: aka Errata Slip A piece of paper either laid in to the book correcting errors found in the printed text after being...[more]