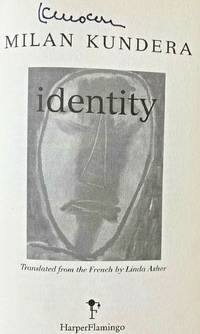 HARDCOVER. SIGNED in Person at the Book Signing Event. IDENTITY by Milan Kundera (1998). SIGNED to the Full Title page by Milan Kundera, the author. Translated from the French by Linda Asher. Near Brand New and Never owned. This is a FIRST Edition, FIRST Printing copy as stated on the copyright page. Dust jacket is in Near Brand New condition with no issues. Book has no tears, marks, creases, remainder marks, library markings, or black lines on the edges. Not inscribed to anyone. Not price-clipped, not a Book Club Edition (BCE), or signed on a bookplate. True Collectible Quality. First Edition, First Printing, hand SIGNED to the Full Title page. No inscription; full signature only. *From an event featuring Milan Kundera and Leoš Janáček with the Cleveland Orchestra in New York City on February 5, 2009.* *FREE: The complete twelve-page program is included.* Any book that I ship that has a Dust jacket will be protected by a New, Clear, Removable Acid-Free Cover. This book will be carefully wrapped and shipped with free delivery confirmation. **** Milan Kundera, born in Brno, Czechoslovakia, was a student when the Czech Communist regime was established in 1948, and later worked as a laborer, jazz musician and professor at the Institute for Advanced Cinematographic Studies in Prague. After the Russian invasion in August 1968, his books were proscribed. In 1975, he and his wife settled in France, and in 1981, he became a French citizen. He is the author of the novels The Joke, Life is Elsewhere, Farewell Waltz, The Book of Laughter and Forgetting, The Unbearable Lightness of Being, and Immortality, and of the short-story collection Laughable Loves - all originally in Czech. His most recent novels, Slowness, Identity, and Ignorance, as well as his non-fiction works The Art of the Novel and Testaments Betrayed, were originally written in French. Identity was published on April 21, 1998. ISBN: 978-0060-1756-41. BS13711.

title page
A page at the front of a book which may contain the title of the book, any subtitles, the authors, contributors, editors, the...[more]
inscribed
When a book is described as being inscribed, it indicates that a short note written by the author or a previous owner has...[more]
bookplate
Highly sought after by some collectors, a book plate is an inscribed or decorative device that identifies the owner, or former...[more]
remainder
Book(s) which are sold at a very deep discount to alleviate publisher overstock. Often, though not always, they have a remainder...[more]
book club edition
A generic term denoting a book which was produced or distributed by one of any number of book club organizations. Usually the...[more]
edges
The collective of the top, fore and bottom edges of the text block of the book, being that part of the edges of the pages of a...[more]
jacket
Sometimes used as another term for dust jacket, a protective and often decorative wrapper, usually made of paper which wraps...[more]
New
A new book is a book previously not circulated to a buyer. Although a new book is typically free of any faults or defects,...[more]
Copyright page
The page in a book that describes the lineage of that book, typically including the book's author, publisher, date of...[more]
First Edition
In book collecting, the first edition is the earliest published form of a book. A book may have more than one first edition in...[more]