Home Second Life Books Inc AN IMPORTANT COLLECTION OF 7 VOLUMES ON THE TRIAL AT THE VENDOME; as well as diverse items relating to the trial… 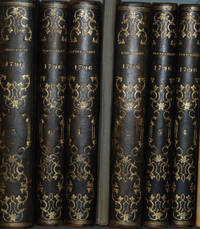 AN IMPORTANT COLLECTION OF 7 VOLUMES ON THE TRIAL AT THE VENDOME; as well as diverse items relating to the trial of Gracchus Babeuf, Jean-Baptiste Drouet, and others

AN IMPORTANT COLLECTION OF 7 VOLUMES ON THE TRIAL AT THE VENDOME; as well as diverse items relating to the trial of Gracchus Babeuf, Jean-Baptiste Drouet, and others

Paris: various publishers, 1797. Volumes 1-6 are 8vo and bound in brown half calf and marble boards. Some of the volumes have moderate foxing, the title page of volume 1 has been rebacked without loss: Volumes 1-3: DEBATS DU PROCES instruit par la Haute-Cour de Justice, contre Drouet, Babœuf, et autres; recueillis par des sténographes. Paris, Imprimerie nationale, s.d. [1797]. 472 pp., 514 pp., 631pp. . [Daline, Saitta, Soboul, 55]. Vol. 4 BAILLY (Nicolas). Discours des accusateurs nationaux pres la Haute-Cour de Justice, Prononcé par le citoyen Bailly, l'un d'eux, A la suite du débat, dans l'affaire du Représentant du peuple Drouet, de Babeuf et autres, accusés de conspiration contre la sûreté intérieure de la République. Vendôme, Imprimerie de la Haute-Cour, an V. 256 pp.-jii pp.-(1)p. non chiffrée-(1)f. errata. This is an essential part of the lawsuit published before the judgement of the High Court. It was included, also, in the volume of the bebate. Martin & Walter I, 1126. Vol. 5-6 HAUTE-COUR DE JUSTICE. COPIE DES PIÈCES saisies dans le local que Babœuf occupait lors de son arrestation. - Suite de la copie des pièces... Paris, Imprimerie nationale, nivôse an V (1797). 334 pp. [This is one of the fundamental documents of the history of "The Conspiracy of Equals." Indeed, the volume 5 (pp. 159-163) contains the first known printing of the famous "Manifesto of the Equals" that was not reprinted until 1828 when it was published by Buinarotti in his "Conspirqacy of Equals" who formally attributes it to Slvain Marechal. Moreover, it is upon the documents in this work that the court supported its charge that lead to the death penalty. [Daline, Saitta, Soboul, 51]. The final volume is uncut and bound in contemporary wraps: RESUME DE PRESIDENT DE LA HAUTE-COUR DE JUSTICE, a la suite du debat, dans l'affaire du representant de peuple Drouet, de Baboeuf et autres, accuses de conspiration contre la surete interieure de la Republic. Seances des 2, 3, et 4 prairial. (Ans V, 12 Mai, 1796). All of this material is very scarce. OCLC shows just one location of our first 6 volumes (GUA). French political agitator and revolutionary, Francois Noel (Gracchus) Babeuf (1760-1797) led the so called "Conspiracy of Equals" against the French Directory. The plot was denounced by the traitor Grisel and a wave of arrests were made on May 10, 1796. There were 65 defendants, including 5 women. A High Court of Justice was held in Vendome in October of 1796. Babeuf and Darthe were executed. As noted by the Britannica:"Babeuf ... published the first number of his "Journal du Liberte de la presses, the title which was altered on the fifth of October to "La Tribune du People." The execution of Robespierre on the 28th of July had ended the Terror, and Babeuf ... defended the men of Thermidor and attacked the fallen terrorists with his Saul violence. But he also attacked from the point of view of his own socialistic theories, the outcome of the Revolution ...this had few supporters ... and in October, Babeuf was arrested and sent to prison in Arras. Here he came under the influence of ... Lebois, editor of the "Journal de l"Egalite" afterwards the "Ami Du Peuple", papers which continued on in the tradition of Marat. He emerged from prison ... convinced that his Utopia ... could only be realized through the restoration of the Constitution of 1793. [The economic problems increased and] "the universal misery gave point to the violent attacks of Babeuf on the existing order ... He gathered around him a small circle of his immediate followers known as the "Societe de Eqaux", soon merged with the rump of the Jacobins." The trial lasted three months. Babeuf and Darthe were executed and a number of others exiled. "Historically his importance lies in the fact that he was the first to propound socialism as a practical policy, and the father of the movements which played so conspicuous a part in the revolutions of 1848 and 1871.

(US)
Bookseller Inventory #
54622
Title
AN IMPORTANT COLLECTION OF 7 VOLUMES ON THE TRIAL AT THE VENDOME; as well as diverse items relating to the trial of Gracchus Babeuf, Jean-Baptiste Drouet, and others
Author
BABEUF, Gracchus
Book condition
Used
Quantity available
1
Publisher
various publishers
Place of Publication
Paris
Date published
1797
Keywords
socialism; communism, BOSTON-VBF
Note
May be a multi-volume set and require additional postage.

Seller rating:
This seller has earned a 5 of 5 Stars rating from Biblio customers.
Biblio.com member since: 2008
Lanesborough, Massachusetts
Ask Seller a Question

calf
Calf or calf hide is a common form of leather binding.  Calf binding is naturally a light brown but there are ways to treat...[more]
rebacked
having had the material covering the spine replaced. ...[more]
title page
A page at the front of a book which may contain the title of the book, any subtitles, the authors, contributors, editors, the...[more]
errata
Errata: aka Errata Slip A piece of paper either laid in to the book correcting errors found in the printed text after being...[more]