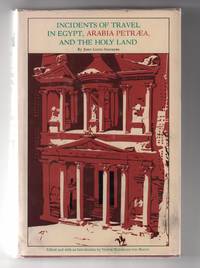 Incidents of Travel in Egypt, Arabia Petraea and the Holy Land

Incidents of Travel in Egypt, Arabia Petraea and the Holy Land

Norman, OK: University of Oklahoma Press, 1970. First Thus. Hardcover. Near fine/near fine. Frederick Catherwood. A near fine first edition thus, newly edited with an introduction by Victor Wolfgang von Hagen. Illustrations by Catherwood. Rust colored cloth boards. . Small smudge on bottom edge of book, otherwise fine. Dust jacket is very good plus, showing mild shelf wear at head and tail, and is price-clipped. Maps, illustrations and index. 473 pp. Octavo. Perhaps best known for his discovery of the Mayan ruins in the Yucatan, lawyer-turned-archaeologist John Lloyd Stephens (1805–1852) was the author of a number of highly praised travel books. The present volume, his first effort in the genre, received wide acclaim from reviewers, including Edgar Allan Poe, who found it ''written with a freshness of manner evincing manliness of feeling.''Conversational and unpretentious, the book is a delightful narrative of the author's year-long journey through the Middle East, incorporating detailed observations of such architectural marvels as the Pyramids, the temples of Karnak, the red-rock city of Petra and more, and offering charming accounts of a Turkish bath, how to catch a crocodile, the wardrobe of a Nubian damsel, a night in a tomb, the hospitality of the Arabs, desert horses, Easter in Jerusalem, and much more.Enhanced by superb illustrations by Frederick Catherwood, this Stephens volume will delight armchair travelers..." ---BOL

Seller rating:
This seller has earned a 5 of 5 Stars rating from Biblio customers.
Biblio.com member since 2014
Gridley, California
Ask Seller a Question

Tail
The heel of the spine.
Octavo
Another of the terms referring to page or book size, octavo refers to a standard printer's sheet folded four times, producing... [More]
Cloth
"Cloth-bound" generally refers to a hardcover book with cloth covering the outside of the book covers. The cloth is stretched... [More]
Fine
A book in fine condition exhibits no flaws. A fine condition book closely approaches As New condition, but may lack the... [More]
First Edition
In book collecting, the first edition is the earliest published form of a book. A book may have more than one first edition in... [More]
Shelf Wear
Shelf wear (shelfwear) describes damage caused over time to a book by placing and removing a book from a shelf. This damage is... [More]
Jacket
Sometimes used as another term for dust jacket, a protective and often decorative wrapper, usually made of paper which wraps... [More]