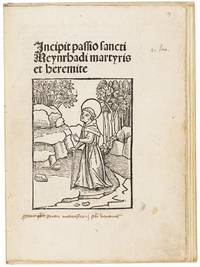 Edited by Sebastian Brant. Basel: Michael Furter, XII. kal. octobris (= 20 September) 1496. First Latin edition.
The legend of a Swiss saint and the foundation of Einsiedeln Abbey.
This small incunable contains the account of the life of St. Meinrad of Einsiedeln. Sebastian Brant's rare Latin edition is based on a 12th-century manuscript. Twenty-one fine large woodcuts illustrate the story of the saint and his martydom.
Meinrad became priest and monk on the Reichenau island (Lake Constance), and decided to live as a hermit. First he settled at Etzel Pass, but in 835 he retreated to the 'Finstern Walde' (Dark Forest, in today's canton Schwyz), where he was assassinated by two robbers on 21 January 861. According to the legend, ravens revealed the identities of the murderers, who thus were caught and executed. At the place of Meinrad's hermitage Benedictine monks founded the monastery of Einsiedeln (the name signifying 'hermitage'), whose abbots were elevated to the rank of princes by Rudolf of Hapsburg in 1274. Einsiedeln Abbey, whose present buildings date from between 1704 and 1720, developed into one of the world's most important destinations for pilgrims till these days. The present Latin edition of the Passio Meynradi was edited by Sebastian Brant and was probably commissioned by Albrecht of Bonstetten (deacon of Einsiedeln from 1470 onwards). The redaction of the text was likewise attributed to him – erroneously, as we know now. As P. Gebhard Müller found out, the text is based on cod. 249 of the Stiftsbibliothek Einsiedeln, (Ink.-Kat. Einsiedeln, no. 558). This 12th-century manuscript is a copy of the Vita Meinradi, which a monk of the Reichenau had compiled already in the 9th century (Verfasserlexikon I, cols. 176-179).
The legend was first translated into German in the 14th century. The first printed version of the text in German appeared about 1460 in the form of a blockbook, probably in Basel. After the first German typographic editions of 1481/82 (Basel) and c. 1495 (Nuremberg) followed in c. 1496 an edition from Michael Furter's press in Basel (Von sant Meinrat ein hübsch lieplich lesen, was ellend und armut er erlitten hat; ISTC im00531200). Shortly after, he published the present first Latin edition, dated on 20 September 1496. This edition is sometimes thought to have been printed before the German edition (e.g. Arnim, Bodemann), but this is unlikely because of the condition of the woodcuts.
The lively three-quarter-page illustrations depict episodes from the life of the saint: his travels on land and on board a ship, the founding of his hermitage, the attempts of two devils to seduce him, his assassination, the exposition of the murderers, etc.
The pictures are based on the illustrations of the blockbook although the order of the images sometimes differs and some are reversed. According to Hieronymus they may be due to the Master of Verardus. Furter's preceding German edition contained thirty-seven woodcuts. Of these, a selection of twenty-one illustrations were used for the present Latin edition. Furter used these woodcuts for several reprints until 1512, and for Petermann Etterlin's Chronik der Eidgenossenschaft (1507). Subsequently, the series was repeatedly reused by other printers up to 1587, damaged blocks being substituted when necessary.
Provenance: 1. Netherlands (?), ownership inscription of a monastery dedicated to St. Bavo on title-page: pertinet in priori monasterii sancti bavonis. – 2. Leipzig, Karl W. Hiersemann, antiquarian bookseller and publisher, Incunabula, catalogue 425, May 1913, no. 51 (?). – 3. Paris, Georges Heilbrun, bookseller. – 4. Brussels, Florimond Tulkens, bookseller; sold at Los Angeles antiquarian book fair, 1967, to August Laube, Zürich. – 5. Schweinfurt, Otto Schäfer collection (OS 585), acquired in December 1967 from Laube.

gilt
The decorative application of gold or gold coloring to a portion of a book on the spine, edges of the text block, or an inlay in... [More]
Incunabula
Incunabula (incunable or incunabulum) refers to a book printed before 1501 - a pamphlet, a book or document that was not... [More]
morocco
Morocco is a style of leather book binding that is usually made with goatskin, as it is durable and easy to dye. (see also... [More]
vellum
Vellum is a sheet of specialty prepared skin of lamb, calf, or goat kid used for binding a book or for printing and writing. ... [More]
fine
A book in fine condition exhibits no flaws. A fine condition book closely approaches As New condition, but may lack the... [More]
leaves
Very generally, "leaves" refers to the pages of a book, as in the common phrase, "loose-leaf pages." A leaf is a single sheet... [More]
Fair
is a worn book that has complete text pages (including those with maps or plates) but may lack endpapers, half-title, etc.... [More]