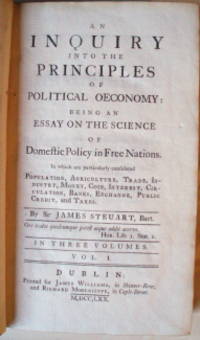 An Inquiry into the Principles of Political Oeconomy

An Inquiry into the Principles of Political Oeconomy

First Dublin edition. The first important English work on political economy. James Steuart (1712-1780) is represented as someone who produced a systematic treatment of economics, but in pre-Physiocratic form. Although his book was first published in 1767, the main elements of the argument were established in isolation in Germany in the late 1750’s. The Principles is dominated by a concern with a socio-economic system in a situation where different national economies have different growth rates. Both perspectives ensured that the book was largely concerned with matters of economic policy, and have given the misleading claim that Steuart was a mercantilist. Steuart was particularly worried about population growth and his views bear an uncanny resemblance to the later views of Malthus.

David Hume is reported as being critical of the ‘form and style’ of the work but ‘exceedingly pleased’ with it as an ‘ingenious performance’ when he looked it over in manuscript in 1766. Whilst Steuart’s interventionist economic principles provoked Adam Smith to refute them in The Wealth of Nations, recent commentary has emphasized the continuity in Scottish economic thought from David Hume to James Steuart to Adam Smith.

Marx noticed him and he gradually enjoyed some attention from the members of the German Historical School in the 19th Century who appreciated his historical bent and his belief that economic development must be consciously managed by the state. More recently he has been hailed as a forerunner of the ‘economics of control’ and the concept of development planning.

This three volume Irish printing is rarely seen for sale.

gilt
The decorative application of gold or gold coloring to a portion of a book on the spine, edges of the text block, or an inlay in...[more]
fine
A book in fine condition exhibits no flaws. A fine condition book closely approaches As New condition, but may lack the...[more]
octavo
Another of the terms referring to page or book size, octavo refers to a standard printer's sheet folded four times, producing...[more]
calf
Calf or calf hide is a common form of leather binding.  Calf binding is naturally a light brown but there are ways to treat...[more]