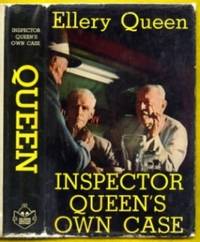 by Queen, Ellery (PSUED Frederic Dannay and Manfred B Lee)

312 pages. Octavo (8" x 5 1/2") bound in original publisher's quarter greeen cloth with gilt lettering to spine over black boards with faux signature in gilt in original pictorial jacket. First edition. Ellery Queen is both a fictional character and a pseudonym used by two American cousins from Brooklyn, New York: Daniel (David) Nathan, alias Frederic Dannay (October 20, 1905September 3, 1982) and Manford (Emanuel) Lepofsky, alias Manfred Bennington Lee (January 11, 1905April 3, 1971), to write detective fiction. In a successful series of novels that covered forty-two years, Ellery Queen served as both author's name and that of the detective-hero. Movies, radio shows, and television shows have been based on their works. The two, particularly Dannay, were also responsible for co-founding and directing Ellery Queen's Mystery Magazine, generally considered as one of the most influential English crime fiction magazines of the last sixty-five years. They were also prominent historians in the field, editing numerous collections and anthologies of short stories such as The Misadventures of Sherlock Holmes. Their 994-page anthology for The Modern Library, 101 Years' Entertainment: The Great Detective Stories, 1841-1941, was a landmark work that remained in print for many years. Under their collective pseudonym, the cousins were given the Grand Master Award for achievements in the field of the mystery story by the Mystery Writers of America in 1961. "How actually did they do it? Did they sit together and hammer the stuff out word by word? Did one write the dialogue and the other the narration? ... What eventually happened was that Fred Dannay, in principle, produced the plots, the clues and what would have to be deduced from them as well as the outlines of the characters and Manfred Lee clothed it all in words. But it is unlikely to have been as clear cut as that." The cousins also wrote four novels about a detective named Drury Lane using the pseudonym Barnaby Ross, and allowed the Ellery Queen name to be used as a house name for a number of novels written by other authors. Condition: Light rubbing to heal hinge, pages beginning to darken, back corners gently bumped. Jacket corners and spine ends chipped, lightly soiled. A very good copy in like jacket... First Edition. Original Cloth. Very Good/Very Good. Octavo.

octavo
Another of the terms referring to page or book size, octavo refers to a standard printer's sheet folded four times, producing...[more]
New
A new book is a book previously not circulated to a buyer. Although a new book is typically free of any faults or defects,...[more]
spine
The outer portion of a book which covers the actual binding. The spine usually faces outward when a book is placed on a shelf....[more]
First Edition
In book collecting, the first edition is the earliest published form of a book. A book may have more than one first edition in...[more]
hinge
The portion of the book closest to the spine that allows the book to be opened and closed.
jacket
Sometimes used as another term for dust jacket, a protective and often decorative wrapper, usually made of paper which wraps...[more]
Cloth
"Cloth-bound" generally refers to a hardcover book with cloth covering the outside of the book covers. The cloth is stretched...[more]
soiled
Generally refers to minor discoloration or staining.
rubbing
Abrasion or wear to the surface. Usually used in reference to a book's boards or dust-jacket.
gilt
The decorative application of gold or gold coloring to a portion of a book on the spine, edges of the text block, or an inlay in...[more]