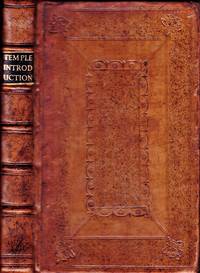 An Introduction to the History of England

An Introduction to the History of England

Sir William Temple, 1st Baronet (1628-1699) Restoration diplomat, statesman and essayist. Jonathan Swift was his secretary from 1689; the original manuscript was in Swift's hand. Swift began a sequel to this work, but later abandoned it. Samuel Johnson stated Temple was "the first writer who gave cadence to English prose" and modelled his own style upon it. One of the earliest scholarly studies of Anglo-Saxon and Anglo-Norman culture.

Levine, Joseph M. The Battle of the Books. History and literature in the Augustan Age. Cornell University Press. 1991.

gilt
The decorative application of gold or gold coloring to a portion of a book on the spine, edges of the text block, or an inlay in...[more]
title page
A page at the front of a book which may contain the title of the book, any subtitles, the authors, contributors, editors, the...[more]
edges
The collective of the top, fore and bottom edges of the text block of the book, being that part of the edges of the pages of a...[more]
spine
The outer portion of a book which covers the actual binding. The spine usually faces outward when a book is placed on a shelf....[more]
raised band(s)
Raised bands refer to the ridges that protrude slightly from the spine on leather bound books.  The bands are created...[more]
gutter
The inside margin of a book, connecting the pages to the joints near the binding.
bookplate
Highly sought after by some collectors, a book plate is an inscribed or decorative device that identifies the owner, or former...[more]
calf
Calf or calf hide is a common form of leather binding.  Calf binding is naturally a light brown but there are ways to treat...[more]
octavo
Another of the terms referring to page or book size, octavo refers to a standard printer's sheet folded four times, producing...[more]