Home Phillip J. Pirages Fine Books and Medieval Manuscripts AN INTRODUCTION TO THE KNOWLEDGE OF RARE AND VALUABLE… 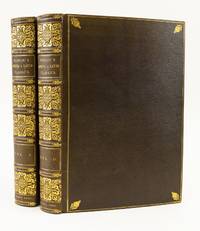 London: Printed for Harding & Lepard, 1827. Fourth Edition. 292 x 197 mm. (11 1/2 x 7 3/4"). Two volumes. HANDSOME EARLY 20TH CENTURY BROWN STRAIGHT-GRAIN MOROCCO, covers with gilt double fillet border, fleuron cornerpieces, raised bands, spines richly gilt with panels dominated by a bold and complex quatrefoil incorporating spade-like tools and with palmette cornerpieces, turn-ins with two gilt fillets, marbled endpapers, all edges gilt. With a facsimile of Greek and Latin text from the Complutensian Polyglot and volume I with a specimen leaf laid down, as called for (the leaf taken from the 1826 Pickering Diamond miniature edition of the New Testament). A Large Paper Copy. Front pastedowns with engraved armorial bookplate of John William Pease; rear pastedown with vellum armorial bookplate of Lord Wardington. Lowndes I, 639; Brunet II, 684 ("Édition la plus complète et la meilleure"); Graesse I, 382. A touch of rubbing to tail edge of boards, one leaf with a thin band of soiling along four inches of the fore edge, light glue stain at lower corner of specimen leaf, endpapers with faint fox spots (isolated minor foxing elsewhere), other trivial imperfections, but generally A VERY FINE COPY, the text clean and fresh, with vast margins, and the decorative bindings with no significant wear. This is the extremely attractive Wardington copy of the fourth and best edition of this quotable bibliographical classic. It is more heavily weighted than the earlier printings toward the Bible and the early Church Fathers and, because of the presence of the Pickering specimen leaf, it also qualifies as the earliest example to our knowledge of a leaf book. This was Dibdin's first work as a bibliographer, and it quickly became the standard guide in English to editions of the classics. Its favorable notice brought him a position as Lord Spencer's librarian, along with ecclesiastical preferment, and he was consequently allowed to pursue his bibliographic career without financial worries. Spencer invited him not only to catalogue, but also to add to, the library at Althorp, and Dibdin (1776-1847) turned it into the finest library in private hands in England. Our impressive Large Paper Copy comes from another of England's fine private libraries, the collection of Lord Wardington (1924-2005), who was, successively, Chairman, Vice-President, and then President of the Friends of the British Library. His grandfather, John William Pease, was a member of the Northumberland banking and business family who amassed a substantial library, and Lord Wardington added greatly to it, particularly important Bibles and atlases. The Wardington sales at Sotheby's in London were major bibliophilic events in 2005 and 2006.

raised band(s)
Raised bands refer to the ridges that protrude slightly from the spine on leather bound books.  The bands are created...[more]
miniature
A book that is less then 3 inches in width and ...[more]
fine
A book in fine condition exhibits no flaws. A fine condition book closely approaches As New condition, but may lack the...[more]
facsimile
An exact copy of an original work. In books, it refers to a copy or reproduction, as accurate as possible, of an original...[more]
vellum
Vellum is a sheet of specialty prepared skin of lamb, calf, or goat kid used for binding a book or for printing and writing. ...[more]
gilt
The decorative application of gold or gold coloring to a portion of a book on the spine, edges of the text block, or an inlay in...[more]
edges
The collective of the top, fore and bottom edges of the text block of the book, being that part of the edges of the pages of a...[more]
morocco
Morocco is a style of leather book binding that is usually made with goatskin, as it is durable and easy to dye. (see also...[more]
New
A new book is a book previously not circulated to a buyer. Although a new book is typically free of any faults or defects,...[more]
rubbing
Abrasion or wear to the surface. Usually used in reference to a book's boards or dust-jacket.
fore edge
The portion of a book that is opposite the spine.   That part of a book which faces the wall when shelved in a...[more]
tail
The heel of the spine.
bookplate
Highly sought after by some collectors, a book plate is an inscribed or decorative device that identifies the owner, or former...[more]