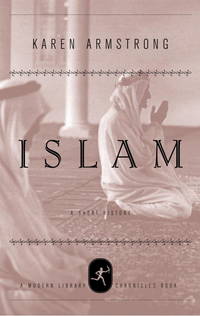 New York, NY: Modern Library, 2000. Reprint. Later printing. Hardcover. Very good/very good. Sewn binding. Cloth over boards. With dust jacket. xxxiv, [2], 222, [12] p. Maps. Chronology. Key FIgures; Glossary. Notes. Suggestions for Further Reading. Index. One of the world's foremost historians and thinkers on religious affairs writes on the history and destiny of the world's fastest-growing but most misunderstood religion: Islam. From WIkipedia: "Karen Armstrong FRSL (born 14 November 1944) is a British author and commentator known for her books on comparative religion. A former Roman Catholic religious sister, she went from a conservative to a more liberal and mystical Christian faith. She attended St Anne's College while in the convent and majored in English. She would become disillusioned and leave the convent in 1969. She first rose to prominence in 1993 with her book A History of God: The 4, 000-Year Quest of Judaism, Christianity and Islam. Her work focuses on commonalities of the major religions, such as the importance of compassion and the Golden Rule. Armstrong received the $100, 000 TED Prize in February 2008. She used that occasion to call for the creation of a Charter for Compassion, which was unveiled the following year. Armstrong was born at Wildmoor, Worcestershire, into a family of Irish ancestry who, after her birth, moved to Bromsgrove and later to Birmingham. In 1962, at the age of 18, she became a member of the Sisters of the Holy Child Jesus, a teaching congregation, in which she remained for seven years. Armstrong claims she suffered physical and psychological abuse in the convent, according to The Guardian newspaper: -Once she had advanced from postulant and novice to professed nun, she enrolled in St Anne's College, Oxford, to study English. Armstrong left her order in 1969 while still a student at Oxford. After graduating with a Congratulatory First, she embarked on a DPhil on the poet Tennyson. According to Armstrong, she wrote her dissertation on a topic that had been approved by the university committee. Nevertheless it was failed by her external examiner on the grounds that the topic had been unsuitable. Armstrong did not formally protest this verdict, nor did she embark upon a new topic but instead abandoned hope of an academic career. She reports that this period in her life was marked by ill-health stemming from her lifelong but, at that time, still undiagnosed temporal lobe epilepsy. In 1976, Armstrong took a job as teaching English at a girls' school in Dulwich while working on a memoir of her convent experiences. This was published in 1982 as Through the Narrow Gate to excellent reviews. That year she embarked on a new career as an independent writer and broadcasting presenter. In 1984, the British Channel Four commissioned her to write and present a TV documentary on the life of St. Paul, The First Christian, a project that involved traveling to the Holy Land to retrace the steps of the saint. Armstrong described this visit as a "breakthrough experience" that defied her prior assumptions and was the inspiration for virtually all her subsequent work. In A History of God: The 4, 000-Year Quest of Judaism, Christianity and Islam (1993), she traces the evolution of the three major monotheistic traditions from their beginnings in the Middle East up to the present day and also discusses Hinduism and Buddhism. As guiding "luminaries" in her approach, Armstrong acknowledges (in The Spiral Staircase and elsewhere) the late Canadian theologian Wilfred Cantwell Smith, a Protestant minister, [5] and the Jesuit father Bernard Lonergan. In 1996, she published Jerusalem: One City, Three Faiths. Armstrong's The Great Transformation: The Beginning of Our Religious Traditions (2006) continues the themes covered in A History of God and examines the emergence and codification of the world's great religions during the so-called Axial age, identified by Karl Jaspers. In the year of its publication Armstrong achieved the distinction of being invited to choose her eight favourite records for BBC Radio's Desert Island Discs programme. She has made considerable appearances on television, including appearances on Rageh Omaar's programme The Life of Muhammad. She was.

Karen Armstrong is one of the world's foremost scholars on religious affairs. She is the author of several bestselling books, including The Battle for God, Jerusalem, The History of God, and Through the Narrow Gate, a memoir of her seven years as a nun. She lives in London.

Books are offered subject to prior sale. Satisfaction guaranteed. If you notify us within 7 days that you are not satisfied with your purchase, we will refund your purchase price when you return the item in the condition in which it was sold.

Seller rating:
This seller has earned a 5 of 5 Stars rating from Biblio customers.
Biblio.com member since: 2005
Silver Spring, Maryland
Ask Seller a Question

jacket
Sometimes used as another term for dust jacket, a protective and often decorative wrapper, usually made of paper which wraps...[more]
Cloth
"Cloth-bound" generally refers to a hardcover book with cloth covering the outside of the book covers. The cloth is stretched...[more]
reprint
Any printing of a book which follows the original edition. By definition, a reprint is not a first edition.