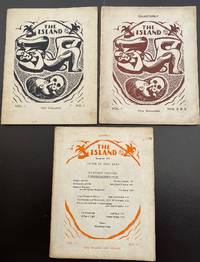 A complete set (3 Vols.) of the quarterly journal 'The Island' published by The Hawthorne Press & The Favil Press in 1931. Only 4 issues of this quarterly journal were ever issued. They were issued in quarto and in 3 parts (complete) as Vol.1, Vol.2&3 and Vol.4. All 3 volumes are in Very Good++ or better condition. Original decorative stiff card wrappers designed by Leon Underwood. Number I stapled as issued, Numbers II/III with linen spine intact, number IV stitched as issued but the contents have become detached from the stitching. All covers complete with some age related marking to the covers. Splitting to the lower half of the front spine fold of vol. 2&3 but the cover remains firmly attached. Free from inscriptions. Internally mild toning and light spotting in places but in very nice condition for their age. Profusely illustrated throughout with Wood-engravings by Leon Underwood, Henry Moore, Gertrude Hermes, Blair Hughes-Stanton, Elizabeth Groom, Ralph Chubb, Eileen Agar, Laurence Bradshaw, Grace Rogers, Sidney Hunt, Laurence Josephs. Sole edition of this interesting 1930's quarterly, edited by the Hungarian emigré Josef Bard (1892-1975), later a friend and supporter of Ezra Pound, and the artist Leon Underwood (1890-1975). Mahatma Gandhi contributed a piece ('Religion and Art') to Number IV. '[Underwood] joined the staff of the Royal College - numbering Barbara Hepworth among his pupils - and in 1921 opened his own Brook Green School of Drawing. Students included Henry Moore, Eileen Agar, Blair Hughes-Stanton, and Gertrude Hermes. The pupils, together with other young artists and intellectuals in the Hammersmith and Chiswick neighbourhood, formed a lively and creative coterie. They enjoyed fancy-dress parties at Girdler's Road, but also forged artistic alliances. From this Brook Green circle emerged in 1925 the English Wood-Engraving Society, and in 1931 a short-lived review, The Island , which carried artwork by Moore, Agar, and Laurence Bradshaw as well as Underwood's own woodcuts and writings' (ODNB). All three volumes are protected in removable Mylar archival covers. A very scarce, complete set in collectible condition with COPAC locating just two sets. More images available on request. Ashton Rare Books welcomes direct contact.

Seller rating:
This seller has earned a 5 of 5 Stars rating from Biblio customers.
Biblio.com member since: 2015
Market Harborough, Leicestershire
Ask Seller a Question

We trade as a family-run internet business in Market Harborough in the heart of the Midlands. We have over 10 years experience of collecting and selling a range of genres, specialising in iconic modern fiction and children's titles. Please feel free to browse our website: www.ashtonrarebooks.com. All items are fully described and if any reasonable discrepancy is noted on arrival to the customer, a full refund including payment for return to us will be made. Items over £250 may be paid for in instalments subject to agreement- however, all books remain the property of Ashton Rare Books until the full balance has been paid. Please contact us at : les@ashtonrarebooks.com if you are looking for a particular title or require further assistance.We are full members of the PBFA, ABA and ILAB.

quarto
The term quarto is used to describe a page or book size. A printed sheet is made with four pages of text on each side, and the...[more]
spine
The outer portion of a book which covers the actual binding. The spine usually faces outward when a book is placed on a shelf....[more]
wrappers
The paper covering on the outside of a paperback.  Also see the entry for pictorial wraps, color illustrated coverings for...[more]