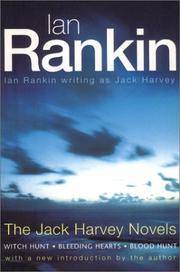 Orion, Oct 2000. Paperback. Oh, the blessings of being an author with too much time on his hands. I can just picture Ian Rankin sitting in the house (farm? cottage?) he and his wife bought in rural Dordogne, having whizzed through the manuscript for yet another increasingly well-written John Rebus novel and - having left behind all other employment across the British Channel and neither inclined to carpentry nor gardening - feeling his mind growing restless, in need of occupation. Now, wouldn't you have started looking for another outlet for your creative energy had you been in his spot?\nThe result of the aforementioned process, which Rankin describes in this compilation's foreword, were three thrillers written under the pseudonym Jack Harvey (Jack for his newborn son, Harvey for his wife's maiden name); now finally back in print and reunited in a single volume.\nJack Harvey's career began with "Witch Hunt," the story of a female assassin - the title character - pursued by various agents of the British and French governments, as well as retired secret service man Dominic Elder, who has both a private and a professional bone to pick with her. The plot moves at Rankin's trademark fast pace, from Witch's arrival on Britain's South Coast (leaving her calling card by blowing up both boats she'd used to cross the Channel from France ... with their crews inside) to her first order of "real" business in Scotland, then to London, where Witch implements her plan's second phase and where her hunters have meanwhile formed a reluctant coalition, to France and Germany, for two rookie agents' unlicensed investigation of the assassin's past, and ultimately back to London, for Witch's final coup, amidst a major international conference no less. As in the Rebus novels, Rankin particularly excels in the creation of his male characters; they are three-dimensional and, all in their own ways, flawed and profoundly human(e). The book's few female protagonists strike me a bit too much as variations on the same theme (superwoman with varying degrees of femininity, or what passes for such in male eyes): while justifiable in the title character - especially if, as Rankin says, she was inspired by the "Elektra: Assassin" series - overall this made it a tad difficult for me to identify with either of them. For proof that Rankin, even then, could do much better, consider DC Clarke in the Rebus novels ... or Belinda, the (anti-)hero's companion in the second Jack Harvey novel, "Bleeding Hearts." Plot-wise, I don't necessarily think the final denouement of "Witch Hunt" is a let-down per se; although I would've wished it had been developed more fully, as had the private motivations of Dominic Elder and one of the rookies, French agent Dominique (!) Herault. Still, Rankin's first Jack Harvey thriller is a major cut above average and a great introduction to the two following books.\nFor things really shift into high gear with the second novel, "Bleeding Hearts." Unusual is, already, its protagonist Mike Weston: another assassin, but this time a large part of the story is told from his perspective, and the presumed "bad guy's" first person narrative magnetically draws you in, until you end up rooting for *him* - the cool, slick, smart, presumably rather goodlooking operator - and not for ex-cop-turned-P.I. Hoffer, who's been on Mike's heels for years, and compared to whom even a classic noir gumshoe would almost look like an epitome of innocence (besides being a good deal slimmer). In addition, Mike suffers from a birth defect both supremely ironic and potentially fatal in his line of work: hemophilia. Add to that a few bad guys who actually do make Mike look well-neigh moral in comparison, an international conspiracy drawing on the perpetually interesting subject of religious sects and on a lesser-known Iran-Contra tidbit, and Rankin's superb instinct for locales, language and dialogue, and you have one heck of a ride; beginning with an assassination assignment that, in hindsight, has all hallmarks of a setup, and ending with a high-powered chase from London to Yorkshire, Scotland and all across the United States, with a final shootout near Olympic National Park in Washington State that could've been choreographed by Sam Peckinpah or Brian De Palma.\nIn "Blood Hunt," lastly, fans of Inspector Rebus meet an old acquaintance; George Reeve from the first Rebus novel, "Knots and Crosses." Only here he's the good guy - well, mostly; there isn't such a thing as a clean-cut "good guy" in *any* Rankin novel. In any event, "Blood Hunt" introduces us to Reeve's back story, and it almost works (in that the essential facts are in synch with his and Rebus's SAS past) ... even though to truly click with "Knots and Crosses," this book would've had to be written about a decade earlier, or vice versa, which in turn wouldn't square with the later Rebus books' historical and political references ... you get the picture. Read as a stand-alone, though, this is a tightly-plotted thriller, every bit as violent as "Bleeding Hearts" (there's a reason why blood figures in both books' titles) and, while based on a conspiracy theory that easily dates it as a mid-1990s release, as strong as the second Jack Harvey novel and the best of the Rebus books on characters and settings (Scotland to San Diego, London, France and back, with - literally - a cliffhanger finale on the Outer Hebrides' rough mountainous territory). Oh, and then there's that children's rhyme that I don't think I'll ever hear quite the same way I used to ...\nWhile I'm happy enough for Rankin's success with Inspector Rebus and wouldn't want any story featuring Edinburgh's finest (and most hard-drinking) D.I. missing from my bookcases, in a way I regret that Rankin had to shelve Jack Harvey after only three books. But at least those are back in print. And yes, Mr. Rankin, I think I did spot the occasional Rebus in-joke, too - well, some of them at least.\nLove Me Tenderloin, anyone?

If you are unsatisfied with the condition of a book, please contact us immediately by email. We offer a 30 day return guarantee, with full refund including original shipping costs for up to 30 days after delivery if an item arrives misdescribed or damaged.

Seller rating:
This seller has earned a 5 of 5 Stars rating from Biblio customers.
Biblio.com member since: 2020
Ashford, Wicklow
Ask Seller a Question

We have a number of rare and out-of print books specialising in Celtic studies, particularly Irish language and history, as well as fine editions of texts relating to the Eighteenth Century.