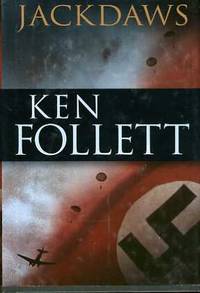 D-Day is approaching. They don’t know where or when, but the Germans know it'll be soon, and for Felicity “Flick” Clariet, the stakes have never been higher. A senior agent in the ranks of the Special Operations Executive (SOE) responsible for sabotage, Flick has survived to become one of Britain’s most effective operatives in Northern France. She knows that the Germans’ ability to thwart the Allied attack depends upon their lines of communications, and in the days before the invasion no target is of greater strategic importance than the largest telephone exchange in Europe. But when Flick and her Resistance-leader husband try a direct, head-on assault that goes horribly wrong, her world turns upside down. Her group destroyed, her husband missing, her superiors unsure of her, her own confidence badly shaken, she has one last chance at the target, but the challenge, once daunting, is now near impossible. The new plan requires an all-woman team, none of them professionals, to be assembled and trained within days. Code-named the Jackdaws, they will attempt to infiltrate the exchange under the noses of the Germans—but the Germans are waiting for them now and have plans of their own. There are secrets Flick does not know—secrets within the German ranks, secrets among her hastily recruited team, secrets among those she trusts the most. And as the hours tick down to the point of no return, most daunting of all, there are secrets within herself.  -Penguin Random House Review

Books are shipped within 2 business days of the sale. We consider Saturday, Sunday, and U.S. Holidays to be non-business days. Books may be returned within 7 days of receipt for any reason. Books must be returned in the condition in which they were received. We make every effort to describe our books (including negative points) as completely as possible. If we make an error BPC Books will pay return shipping under the following conditions: ISBN mis-match, major blemishes not itemized in the description.

Seller rating:
This seller has earned a 5 of 5 Stars rating from Biblio customers.
Biblio.com member since: 2005
Sanger, California
Ask Seller a Question

BPC Books carries rare, out-of-print, and used books of all types. We also sell our own line of radio drama classroom materials.

shelfwear
Minor wear resulting from a book being place on, and taken from a bookshelf, especially along the bottom edge.
fine
A book in fine condition exhibits no flaws. A fine condition book closely approaches As New condition, but may lack the...[more]
jacket
Sometimes used as another term for dust jacket, a protective and often decorative wrapper, usually made of paper which wraps...[more]